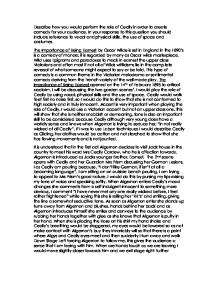 Describe how you would perform the role of Cecily in order to create comedy for your audience.

Describe how you would perform the role of Cecily in order to create comedy for your audience. In your response to this question you should include reference to vocal and physical skills, the use of space and costumes. The Importance of Being Earnest by Oscar Wilde is set in England in the 1890's is a comedy of manors; it is regarded by many as Oscar wilds masterpiece. Wild uses Epigrams and paradoxes to mock in earnest the upper class Victorians and often most if not all of Wilds witticisms lie in the complete reversal of what someone might expect to say or be told. This type of comedy is a common theme in the Victorian melodrama or sentimental comedy deriving from the French variety of the well made play. The Importance of Being Earnest opened on the 14th of February 1895 to critical acclaim. I will be discussing the two garden scenes'. I would play the role of Cecily by using vocal, physical skills and the use of space. ...read more.

I as Cecily am pouting because, "I don't like German, it isn't at all a becoming language". I am sitting on an outside bench pouting, I am trying to appeal to Mrs Prism's good nature, I would do this by pursing my lips raising my tone of voice and speaking softly. When Algernon enters Cecily's mood changes she comments from a self indulgent innocent to something more devious, I comment "I have never met any one really wicked before, I feel rather frightened" while saying this she is rolling her 'RR's' and smiling, giving the line a somewhat seductive tone. As soon as Algernon enter she stands up turns away from Algernon and blushes, hands behind her back and as Algernon introduces himself she smiles and conveys to the audience by rubbing her hands together with glee as she knows that Algernon is putty in her hand. When she is placing the Rose on his shirt my hand shake and Cecily's breathing would be staggered, my eyes would be lowered so as not make contact with Algernon's ...read more.

Uncle John does not smile at me while I clutch his chest to show my affection. I then step back and inform him "What horrid clothes have on", I say this in jest and am giggling slightly to show the audience that I think he has had trouble dressing. I inform him that "brother earnest" is here and he looks shock, I smile because he tells me that "I haven't got a brother". I state that "he's in the dining room" and am beaming because I think that I have done a brilliant task and am ringing my hand with joy, Jack still looks shocked so I skip of stage right, right foot first and go to get Earnest. Cecily is a vital role in The importance of Being Earnest and used a raft of dramatic skills to portray her chirpy character, these skills include; tone, accent, dress, physical skills and the use of space. By using these skills including pause, Cecily will allow the audience to read between the lines and find humour in almost every single sayable. ...read more.