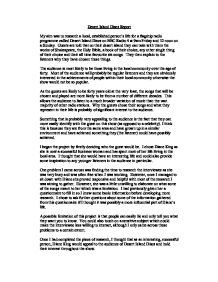 Desert Island Discs Report My aim was to research a local, established person's life for a flagship radio programme called Desert Island Discs on BBC Radio 4 at 9am Friday and 12 noon on a Sunday. Guests are told that on their desert island they can take with them the works of Shakespeare, the Holy Bible, a book of their choice, any other single thing of their choice and their all time favourite six songs. They then explain to the listeners why they have chosen these things. The audience is most likely to be those living in the local community over the age of forty. ...read more.

Why the guests chose their songs and what they represent in their life is probably of significant interest to the audience. Something that is probably very appealing to the audience is the fact that they can more easily identify with the guest on this show (as opposed to a celebrity). I think this is because they are from the same area and have grown up in a similar environment and have achieved something they (the listener) could have possibly achieved. I began the project by firstly deciding who the guest would be. I chose Diane King as she is now a successful business woman and has spent most of her life living in the local area. ...read more.

I had previously given her a questionnaire to fill in so I knew some basic information before developing more research. I chose to ask further questions about some of the information gathered from this questionnaire if I thought it was possibly a more influential part of Diane's life. A possible limitation of this project is that people can easily lie and only tell you what they want you to know. You could also touch on a sensitive subject which could make the interviewee less willing to interact, although I only came across these problems to a certain extent. Once I had completed the piece of research, I thought that as an interesting, successful person, Diane King would appeal to the audience of Desert Island Discs and hold their interest throughout the show. ...read more.