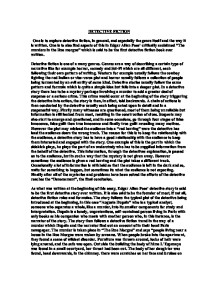 DETECTIVE FICTION One is to explore detective fiction, in general, and especially the genre itself and the way it is written. One is to also find aspects of this in Edgar Allan Poes' critically acclaimed "The murders in the Rue morgue" which is said to be the first detective fiction book ever written. Detective fiction is one of a many genres. Genres are a way of describing a certain type of narrative like for example horror, comedy and Sci-Fi which are all different, each following their own pattern of writing. Western for example usually follows the cowboy fighting the red Indian or vise-versa plot and horror usually follows a collection of people being tormented by an evil entity of some kind. Detective stories usually follow the same pattern and formula which is quite a simple idea but falls into a deeper plot. In a detective story there has to be a mystery perhaps involving a murder to add a greater deal of suspense or a serious crime. This crime would occur at the beginning of the story triggering the detective into action, the story is then, in effect, told backwards. A chain of actions is then conducted by the detective usually each being acted upon in detail and in a suspenseful way. ...read more.

there were scratches on her face and bruises on her neck". This, of course, sparked Dupain into action as in any detective story it would. However Dupain needed another ingredient for his solution of the crime, it came in the form of witnesses (witnesses of course being a main part in any detective fiction story), which were referred to in the paper the next day. Dupain raced into operation questioning all of the witnesses, some described the characters of Mme L'Espanaye and her daughter. Others described the voices and sounds they heard on the night however all reports are very different except for one account that kept being referred to, the suggestion for the nationality of the speakers. Other witnesses report on the crime scene itself describing that the doors and windows are shut, with no obvious way of entering or leaving the room. After all the witnesses accounts and evidence Dupain decides to visit the crime scene itself. Dupain scrutinises everything and looks at what the witnesses have described to him like the bodies themselves and the shut windows. After a thorough inspection, the main part of any detective arrives (and in this case in all of its glory) ...read more.

From this essay, one has come to the conclusion that all genres have their very own pattern and formula that they have to follow or, in some circumstances they can change. Many genres have a lenient formula to them so that many stories can be different and can deviate from the pattern for quite a considerable bit. However one has learnt that detective fiction stories have quite a tight formula they have to follow or they may transform into another genre quite easily. To be able to write detective fiction the Author or writer must have a vast amount of knowledge about this subject or the story may make little sense and might be uninteresting to the audience. In other genres like for example horror, the writer would not have to have a great deal of knowledge about this genre because it is an imaginary composition which has a wide area of leniency. One finally concludes this undertaking on the fact that detective fiction maybe more than just entertainment but an art because of the skill needed to be applied to this genre as one discussed previously. The genre is not just for the titillation of the audience, but for the writer too as they take pride and time to create such work as any artist would. ?? ?? ?? ?? ...read more.