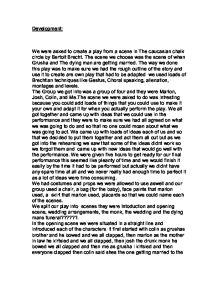 Development: We were asked to create a play from a scene in The caucasian chalk circle by Bertolt Brecht.

Development: We were asked to create a play from a scene in The caucasian chalk circle by Bertolt Brecht. The scene we choose was the scene of when Grusha and The dying man are getting married. The way we done this play was to make sure we had the rough outline of the story and use it to create are own play that had to be adapted we used loads of Brechtian techniques like Gestus, Choral speaking, alienation, montages and levels. The Group we got into was a group of four and they were Marlon, Josh, Colin, and Me.The scene we were asked to do was intresting because you could add loads of things that you could use to make it your own and adapt it for when you actually perform the play. We all got together and came up with ideas that we could use in the performance and they were to make sure we had all agreed on what we was going to do and so that no one could moan about what we was going to act. We came up with loads of ideas each of us and so that we decided to put them together and act them all out but as we got into the rehearsing we saw ...read more.

of birth and i also say where are you going to get the money from and colin says Abbey National and then at the end of this scene colin freezes and i have a little conversation with michael saying that he has caused a lot of trouble and that i looked after him out of the goodness of my heart. Then everyone freezes and i walk over to the placards and say wedding arrangements and show the placard saying wedding arrangements in this scene you see the mother in law and grushas brother coming to a deal and having a arguement about that the mother in law hired a cheap monk to do the service and not a vicar or priest and then the mother in law says im going to get the monk and make sure you dont let him see the baby so i run up to some one in the audience and say can you look after my baby while i tie iup my laces on my sandals and the person says yes so i say what a mug since when have sandals got laces and leave the baby with the person in the audience. ...read more.