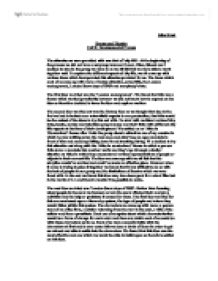 Developmental Process. To explore the different aspects of city life, we all came up with various ideas which incorporated this stimulus provided for us. The ideas which each of us came up with were a fantasy situation, school life, the London undergroun

Alice Hand Drama and Theatre Unit 3: Developmental Process The stimulus we were provided with was that of 'city life'. At the beginning of the process we did not have a set group however Conor, Ellen, Sinead and I decided to stay in the group we were in as we all felt that we were able to work together well. To explore the different aspects of city life, we all came up with various ideas which incorporated this stimulus provided for us. The ideas which each of us came up with were a fantasy situation, school life, the London underground, London Snow days of 2009 and everybody's late. The first idea we tried was the 'London underground'. We found that this was a theme which worked practically however we did not know how to expand on the idea so therefore decided to leave the idea and explore another. The second idea we tried out was the fantasy idea as we thought that due to the fact we had to include non-naturalistic aspects to our production, that this would be the easiest of the ideas to try this out with. To start with we listed various fairy tales, books, movies and television programmes and their links with different city life aspects at the time of their development. We settled on an 'Alice in Wonderland' theme after I told the group about a situation one of my cousins in which he was walking down the road once and didn't see an open manhole in front of him and ended up falling down it and breaking his leg. ...read more.

To begin our production, Ellen and I looked into various news articles about the London Bombings and the enquiries of the London Bombings that are currently happening within the news. We found accounts of various people's survivor stories mainly from the bombing at King's Cross underground. The majority of accounts we found tended to be from those who were not in the carriage. However I found a piece by journalist Peter Zimonjic who was in the London bombings. In this article he wrote about what he saw, felt and heard in every detail and using this article we tried to see what we could explore using his descriptions. One particular part of his article that stood out to us was that of a man he encountered who was lying on the floor that seemed to be hurt from the waist down and he turned out to be paralysed from the waist down after the bomb. This person we thought would be a character we could use for someone within the production piece as an effective character. After discussing the possible outcomes we found that compared to the other proposed storylines we decided that Conor's storyline would have been the most effective out of them all and therefore settled on this character for Conor, which was due to be about a man called Rick White who was an athlete runner going off to meet his girlfriend for an anniversary dinner however he ended up having to do extra training due to being forced by his coach at the last minute. ...read more.

In order to get an idea of what forms of sounds we wanted to incorporate together we all looked at various films and productions we were able to look at through the use of youtube. One film in particular we found helped with giving us an idea of the types of sounds we could use was the 9/11 film. We listened to the forms of sounds which they bound together especially at the moment of impact between the buildings and the plans. Conor and I decided to work on the sounds together as well as the music tracks whilst Ellen and Sinead worked on the lighting effects and also the cues for either the lighting or the sounds along with working out the seconds between each scene and special effect. Conor and I used a library of sounds which Conor had already from his media studies work, we settled upon placing a bombing noise, shattering glass and also a screeching of train tracks together and we felt that this along with our performances helped to create the tube atmosphere at the time of the crash. We gave both Sinead and Ellen the sounds to listen to so we could get their feedback upon the combinations. We also found a song called 'London Bombs' by Eskimo Joe which we felt went the emotion of our production. For the lighting it was decided to keep it simple and high key for the majority of the performances until certain moments mainly so the audience could still see the performances along with past practicals when we've witnessed how difficult it is for the performers to effectively perform within darker lighting. Word Count: 2,685 ...read more.