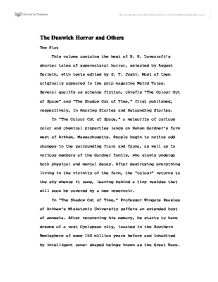 The Dunwich Horror and Others The Plot This volume contains the best of H. P. Lovecraft's shorter tales of supernatural horror, selected by August Derleth, with texts edited by S. T. Joshi. Most of them originally appeared in the pulp magazine Weird Tales. Several qualify as science fiction, chiefly "The Colour Out of Space" and "The Shadow Out of Time," first published, respectively, in Amazing Stories and Astounding Stories. In "The Colour Out of Space," a meteorite of curious color and chemical properties lands on Nahum Gardner's farm west of Arkham, Massachusetts. People begin to notice odd changes in the surrounding flora and fauna, as well as in various members of the Gardner family, who slowly undergo both physical and mental decay. After destroying everything living in the vicinity of the farm, the "colour" returns to the sky whence it came, leaving behind a tiny residue that will soon be covered by a new reservoir. In "The Shadow Out of Time," Professor Wingate Peaslee of Arkham's Miskatonic University suffers an extended bout of amnesia. ...read more.

In "The Dunwich Horror," wizard Whateley and his grandson Wilbur try to bring back the Old Ones, invisible monsters detectable by their fetid odor. Miskatonic's Dr. Henry Armitage, learning of the plot, organizes a team of savants to stop them. In "The Whisperer in Darkness," the crablike fungi from Yuggoth (Pluto) lay siege to the remote Vermont farmhouse of Henry Akeley. Albert Wilmarth, a Miskatonic professor who has been corresponding with Akeley, arrives for a visit but flees in the middle of the night when he realizes that his host's brain has been surgically removed and placed in a metal canister for transport through space. Analysis Eschewing both the traditional ghostly trappings of the gothic and the formulaic action and romance of the popular "scientifiction" of his day, Lovecraft combined a classical style derived from a voluminous reading of eighteenth century literature with a technique of careful realism, rooted in the soil of his native New England, to create a fictional universe in which the human race is of profound insignificance. ...read more.

To travel through space as a disembodied consciousness, as a pure intellect capable of absorbing all the mysteries of the universe, may not be such a terrible fate. By "The Shadow Out of Time" (1934-1935), the extraterrestrials have become fully sympathetic. The Great Race, who in their transcendent quest for knowledge have conquered time, affirm the finest of human values. As in the thematically similar short novel, At the Mountains of Madness (1964; cut versions appeared in the 1930's), however, the horror writer in Lovecraft cannot resist introducing horrors of which even other horrors are afraid. Boundless wonder can give way at any moment to untold terror. In his emphasis on the primal emotion of fear, on atmosphere and mood over character and plot, he ignores such basic human concerns as sex and romantic love. For psychological critics, Love-craft's cosmic indifference is of less interest as a guide to the universe than to his own neuroses. He may have looked to the stars, but he could not help gazing into the abyss of his own soul. Despite his efforts to deny the human, Lovecraft remains a very human figure whose work continues to move millions of readers. ...read more.