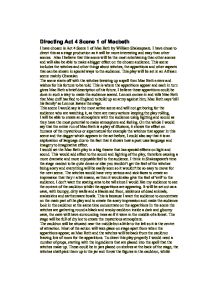 Directing Act 4 Scene 1 of Macbeth I have chosen is Act 4 Scene 1 of Mac Beth by William Shakespeare. I have chose to direct this as a stage production as it will be more interesting and easy than other scenes. Also I believe that this scene will be the most entertaining than other scenes and will also be able to make a bigger effect on the chosen audience. This scene includes the witches and other things about witches, the apparitions and other aspects that can be shown in special ways to the audience. This play will be set in an African scene mainly Ghanaian. The scene starts off with the witches brewing up a spell then Mac Beth enters and wishes for his fortune to be told. This is where the apparitions appear and each in turn gives Mac Beth a brief description of his future. I believe these apparitions could be done in such a way to make the audience scared. Lennox comes in and tells Mac Beth that Mac duff has fled to England to build up an army against him; Mac Beth says 'kill his family' so Lennox leaves the stage. ...read more.

These could be in jars placed on shelves at the back of the stage, the witches shall pick them up in the jar and throw the figures in the cauldron, whilst saying what it is, for example in a creaky and loud voice 'One little finger to add texture' then they would put the jar back on the shelf. Most of the props needed for the scene. Other props also may be needed when the apparitions appear, for example the third apparition is a child crowned with a tree in his hand and for this you need a little tree and a crown to place on the child's head. The witches will all be women, quite young in their 20's, with a mixture of hair colours i.e. black,grey,brown wet with fake blood and mud at the tips. They tie cloths around their waist to their necks, with bare feet and rusted toenails and fingernails. To make them look scary they will have no make up but rather very dirty faces, this leaves them looking scary and more like witches to cause an atmosphere. Also the apparitions may need make-up for example there is a bloody child so that needs fake blood. ...read more.

I can use this speech for example to make the audience feel the witches are perhaps in some way mentally disturbed. The language that takes place in this scene is often confusing in the sense that it is old English and is very hard to understand. Although it would have been the right language for the Jacobean times and many people if not all the people then, would have understood much better that the people today. The language used reminds people of a horror story maybe as horror stories are normally set back in time to create a more mystery and unkemptness to the plot. Ideally I would like the audience to react in a few different ways. Initially I would like them to be so intrigued with the performance that they want to watch on and see what happens next and also I would want them to follow the plot well enough to put themselves in the characters shoes and understand how they are feeling. One other thing I would like them to feel is how the Jacobean audience felt, which was a little scared of the witches and amazed at the effects that were performed. I want the audience to be flabbergasted as well as petrified. ...read more.