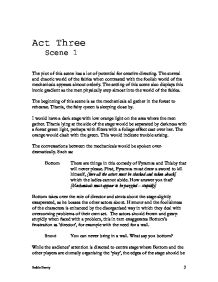 Act Three Scene 1 The plot of this scene has a lot of potential for creative directing. The surreal and chaotic world of the fairies when contrasted with the foolish world of the mechanicals appears almost orderly. The setting of this scene also displays this ironic gradient as the men physically step almost into the world of the fairies. The beginning of this scene is as the mechanicals all gather in the forest to rehearse. Titania, the fairy queen is sleeping close by. I would have a dark stage with low orange light on the area where the men gather. Titania lying at the side of the stage would be separated by darkness with a forest green light, perhaps with filters with a foliage effect cast over her. The orange would clash with the green. This would indicate trouble arising. The conversations between the mechanicals would be spoken over- dramatically. ...read more.

He steps teasingly around them but they pay him no attention. This makes it clear to the audience that both exist in different worlds enhancing the magical aspect of the plot. Attention is drawn again to the players as Quince and Bottom earnestly speak their affectionate lines as lovers: Bottom ...my dearest Thisby dear. But hark, a voice; stay thou but here awhile, And by and by I will to thee appear. Bottom exits and remaining actors freeze as Puck smiles and says to the audience. Puck A stranger Pyramus than e'er played here. Puck would say this with a great mischief and mystery about it. Bottom would look at the audience and act in a very serious way, as if to say 'what's wrong?' - the more serious he is about the fact that he has an asses head, the funnier it will be for the audience. Extremely conspicuous jokes like this would be very amusing to the poorer, less cultured members of the Elizabethan audience. ...read more.

Titania Thou art as wise as thou art beautiful. Another comical irony: he certainly isn't beautiful therefore he isn't wise. Titania's promises of "jewels from the deep", "pressed flowers", "mulberries", "honey-bags" and "bumble-bees", and her magical rhyming verse of pledges of love would crescendo with beautiful lighting effects of swirling forest leaves, and magical sounds of tinkling bells and marimbas would create a hilarious anti-climax if, after Titania's waiting fairies' salute, Bottom were to simply stop and look bewildered at the audience and the music and visual effects were to suddenly cut off (even the music cutting off with the cheesy 'svvvvvp' sound of an LP needle slipping would create the effect I want). For the remainder of the scene, Bottom would be in a very flattered, self confident manner, standing straight and speaking in a 'correct', pompous, southern English accent to even more show his stupidity. In this way the scene would be directed to bring out its magical or comical characteristics, enhancing Shakespeare's sharp dialogue with modern visual effects, music and traditional panto' humour. Robin Beatty 3 ...read more.