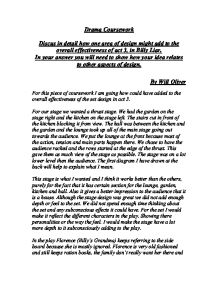 Discus in detail how one area of design might add to the overall effectiveness of act 3, in Billy Liar.

Drama Coursework Discus in detail how one area of design might add to the overall effectiveness of act 3, in Billy Liar. In your answer you will need to show how your idea relates to other aspects of design. By Will Oliver For this piece of coursework I am going how could have added to the overall effectiveness of the set design in act 3. For our stage we wanted a thrust stage. We had the garden on the stage right and the kitchen on the stage left. The stairs cut in front of the kitchen blocking it from view. The hall was between the kitchen and the garden and the lounge took up all of the main stage going out towards the audience. We put the lounge at the front because most of the action, tension and main parts happen there. We chose to have the audience racked and the rows started at the edge of the thrust. This gave them as much view of the stage as possible. The stage was on a lot lower level then the audience. The first diagram I have drawn at the back will help to explain what I mean. This stage is what I wanted and I think it works better than the others, purely for the fact that it has certain section for the lounge, garden, kitchen and hall. ...read more.

He started of new and fresh but over the years his life has faded. The carpet would be a dirty cream colour it would have stains on it and dirt that had been trend into it. The Living room would not come across as a nice family place to be, not somewhere you would like to be. Billy doesn't want to be in there as a family it is very depressing for him and reflects how the family feel about him. He is fed up with the same place and wants to move on. In the living room the fireplace would be lit through out the play. Above it the wallpaper would be stained with the burning smoke from the fire. It would have a dim flame which looks like it just to go out. This is like Billy's life how he is barley coping with his surroundings and in time it will go out and he will move on. When the lights go out at the end all you will see is the flame. After a few seconds it will go out. This shows how finally Billy has moved on. Or you could have the fire burnt out. The ashes are like Billy burnt out and they are trapped in by the grate. ...read more.

This shows Billy has still got hope and by leaving he will be able to start fresh. The garden will only have a garden bench in it. It will iron with wood panels across it that makes seats. The iron will be rusted and will look like it has been left out in the rain. This is like how Billy has been left in the same surroundings not being able to change, he has been just left there to rot. There are some dead flowers in a tight, small corner. This shows how he was trapped and wasn't allowed to grow into who he wanted to be. The garden reflects Billy's life showing what has happened to him but there is sill hope. My Third diagram will help you understand the garden. The audience will be racked starting from the edge other the thrust part. The being raked gives them a superior feel towards the play. This helps them to look down upon the stage and get a better understanding of it all. The final diagram will help you get a better understanding of this. All these things would help act 3, by adding more depth to it which subconsciously effects how the audience feel and understand about the play. The play is mostly about Billy that is why I chose to have the house, garden and general feel all directed or connected to Billy. By Will Oliver ...read more.