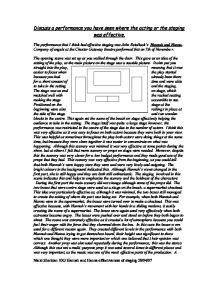 Discuss a performance you have seen where the acting or the staging was effective.

Discuss a performance you have seen where the acting or the staging was effective. The performance that I think had effective staging was John Retallack's Hannah and Hanna. Company of angels at the Chester Gateway theatre performed this on 7th of November. The opening scene was set up as you walked through the door. This gave us an idea of the setting of the play, as the main picture on the stage was a seaside picture. It also put you straight into the play, meaning that it was easier to focus when the play started because you had already been there for a short amount of time and were able to take in the setting and the staging. The stage was an end on stage, which matched well with the racked seating making the stage accessible to see. Positioned on the stage at the beginning were also railings in place at the side of the stage and two wooden blocks in the centre. This again set the scene of the beach on stage effectively helping the audience to take in the setting. The stage itself was quite a large stage however; the performance was restricted to the centre of the stage due to the number of actors. I think this was very effective as it was easy to focus on both actors because they were both in your view. ...read more.

Although this was not a multi-purpose prop it was used several times in different places and was very important, as the music was one of the most effective parts of the production. A chair was also bought on stage during the first half. Although this chair was only a small prop it was very effective as it represented the Grandmother. During this, Hannah was talking to the chair as if her grandmother as there. This was effective as it didn't seem like a girl talking to a chair and it was easy to imagine someone actually sitting on the chair. After the interval again the scenery was already set up, although the main picture had changed. We could tell automatically that the mood of the play was also going change making the staging effective and successful. The main picture had changed from a bright seaside resort, to a dull and grey sea. The loss of colour because of this change was dramatic as it created a darker atmosphere and hinted at a change in the characters behaviour. Also noted was that the boxes had been separated in the centre of the stage. This was also an important point as made the characters more separated and effectively managed to do this with just two boxes. This also created an atmosphere within the performance because in the first part the boxes were together. ...read more.

After the doors had been closed over the grey seaside scene, the doors had black material draped over the back of them. The audience could not notice this however, as the stage was all black. But when these were pulled off and used as blankets, the audience noticed the change of scenery from black to a countryside view immediately as it changed the mood on the stage because it was less tense and more relaxed. This was clever because it was a quick change of surroundings and an extra prop, adding two different looks on the stage to create a brighter atmosphere. Also in this scene, the boxes were again used to create beds which was very effective as it portrayed the idea of them sleeping better then them being curled up on the floor would have. It did this by putting a sense of realism into the performance. The background picture also created senses of hopes within the performance as the last time we saw a bright landscape was at the beginning of the performance were both Hannah's were happy. In conclusion I would say that there were many simple but effective staging ideas within this performance. Each of these ideas managed to increase the tension or change the atmosphere and mood in both the audience and on stage. They also helped the performance to be more realistic, which was harder in this play as there was only two actors, however, it was done well. Nicki Sheridan 10G Hannah and Hanna-effectiveness of staging 28/04/07 ...read more.