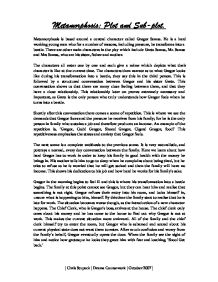 Discuss and Explain the plot and sub-plot of Berkoff's ''Metamorphosis''

Metamorphosis: Plot and Sub-plot. Metamorphosis is based around a central character called Gregor Samsa. He is a hard working young man who for a number of reasons, including pressure, he transforms into a beetle. There are other main characters in the play which include Greta Samsa, Mr. Samsa and Mrs Samsa, who are his sister, father and mother. The characters all enter one by one and each give a mime which depicts what their character is like at the current time. The characters then narrate as to what Gregor looks like during his transformation into a beetle, they say this in the third person. This is followed by a structured conversation between Gregor and his sister Greta. This conversation shows us that there are many close feeling between them, and that they have a close relationship. This relationship later on proves extremely necessary and important, as Greta is the only person who truly understands how Gregor feels when he turns into a beetle. ...read more.

The Chief Clerk, who is Gregor's boss, arrives at the house. The chief clerk only cares about his money and he has come to the house to find out why Gregor is not at work. This makes the current situation more awkward. All of the family and the chief clerk himself try to enter the room, but Gregor who is ashamed and scared about his current physical state does not want them to enter. After much confusion and worry from the family's behalf, Gregor eventually opens the door. When the family see the sight of him and notice how grotesque he looks they greet him with fear and loathing. 'Shoo! Get back.' The beginning of the next scene sees the family, including Gregor talking about Gregor in the third person, about how much anguish and pain he feels. The family, with the omission of Gregor then begin to talk in a worried and confused tone, about what to feed him, how to feed him and when to feed him. ...read more.

They are demanding until they meet Gregor, who is b now a grotesque and unpleasant sight. They argue and leave. This seems to be the final straw, and the family are now conscious that this cannot go on any more. Greta, who so far has been Gregor's guardian angel, distances herself and leaves him. Mrs Samsa, always there for her son, a maternal figure, sees her son, and after he whispers, 'Free... free,' she says, 'Dead,' and thanks God in advance for taking care of him. 'Metamorphosis' ends optimistically. Greta re-appears, and the family tell the audience how beautiful their daughter is, and how their life seems to be happy. They're doing everything they can to forget Gregor, and push on with their lives. Metamorphosis is a complicated, unusual play with many hidden meanings. It focuses on family life, pressure and expectation; how throughout our lives, we are always being ridden with demands. Berkoff uses these themes extremely well to create a visual masterpiece of the uppermost class. ?? ?? ?? ?? | Chris Stupack | Drama Coursework | October 2007 | ...read more.