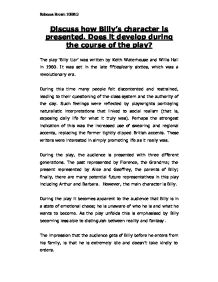 Discuss how Billy's character is presented. Does it develop during the course of the play?

Discuss how Billy's character is presented. Does it develop during the course of the play? The play 'Billy Liar' was written by Keith Waterhouse and Willis Hall in 1960. It was set in the late fifties/early sixties, which was a revolutionary era. During this time many people felt discontented and restrained, leading to their questioning of the class system and the authority of the day. Such feelings were reflected by playwrights portraying naturalistic interpretations that linked to social realism (that is, exposing daily life for what it truly was). Perhaps the strongest indication of this was the increased use of swearing and regional accents, replacing the former tightly clipped British accents. These writers were interested in simply promoting life as it really was. During the play, the audience is presented with three different generations. The past represented by Florence, the Grandma; the present represented by Alice and Geoffrey, the parents of Billy; finally, there are many potential future representatives in this play including Arthur and Barbara. However, the main character is Billy. During the play it becomes apparent to the audience that Billy is in a state of emotional chaos; he is unaware of who he is and what he wants to become. ...read more.

They wanted new things for themselves and they no longer had to be constricted by the class system as this was crumbling. As the play continues, the audience becomes aware of Billy's attitude to work and how unimportant it is to him. This is confirmed by Arthur; Billy's friend; who also believes that Billy is idle and needs to pluck up his ideas. 'You rotten idle crow! Some of us have done a day's work already, you lazy get.' (Act 1: 362) Working in an undertakers symbolises that Billy doesn't want to get anywhere in the life of work because it is considered as a dead end job. However, he makes out to be interested in working in London being a scriptwriter. Billy and Arthur seem to be on the same wave length as when Billy answers the door to Arthur they act a little play between them 'There's trouble up at the mill...' (Act 1: 340) On the other hand, work plays a more crucial part in Arthur's life than it does in Billy's. 'Why aren't you at rotten work...You never turned in last Saturday either' (Act 1: 365) ...read more.

'Yes, and we've heard that one before.' (Act 1: 479) 'I mean, if it isn't another of your stinking lies!' (Act 3: 374) At times this gets Arthur angry because no matter what he says Billy just carries on lying and making things up. Geoffrey emptying Billy's cupboard could symbolise a fresh start for Billy as this cupboard hides Billy's secret life. Consequently, when his dad opens it, it is as though all of Billy's secrets are coming tumbling out which also links to him telling Liz his secret about his fantasy world. The writers may have chosen this particular ending because it shows how Billy's character as developed. This can be said because he wanted to be adventurous and to have freedom (liberated ideas) however, he has realised that he has got to be more responsible indicated by him coming back home instead of going to London. Consequently, Billy's character has developed in many different ways and that he also starts to consider other people and things instead of always thinking about himself. '(He glances towards the ceiling, wondering if he is making too much noise, then crosses and switches off the radio.)' (Act 3: 920) ?? ?? ?? ?? Rebecca Brown 10BRG ...read more.