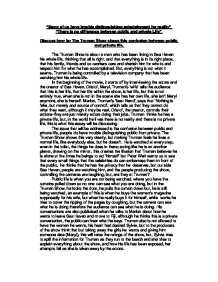 Discuss how far The Truman Show shoes this confusion between public and private life.

"Many of us have trouble distinguishing entertainment for reality" "There is no difference between public and private Life" Discuss how far The Truman Show shoes this confusion between public and private life. The Truman Show is about a man who has been living in Sea Haven his whole life, thinking that all is right, and that everything is in its right place, that his family, friends and co-workers care and cherish him for who is and respect him for what he has accomplished. But, everything is not what it seems, Truman is being controlled by a television company that has been watching him his whole life. In the beginning of the movie, it starts off by interviewing the actors and the creator of Sea Haven, Cristof, Maryl, Truman's 'wife' tells the audience that this is her life, that her life within the show, is her life, but this is not entirely true, when she is not in the scene she has her own life, she isn't Maryl anymore, she is herself. Marlon, Truman's 'best friend', says that 'Nothing is fake, but merely and source of control', which tells us that they cannot do what they want, although it may be real, Cristof, the creator, controls their actions-they are just merely actors doing their jobs. Truman thinks he has a private life, but, in the world he lives there is no reality and there is no private life, this is what this essay will be discussing. ...read more.

keep him within Sea Haven, another example of this is a newspaper article he is shown during his time in work, the head line of the newspaper had read 'Sea Haven: Greatest Place On Earth.' As his life progresses, Truman believes there is something going on, 'a conspiracy against' him that 'it' is after him and that everyone is in 'it', his mother and wife (or so he thinks they are) try to calm him and put on his 'favourite TV. Show 'Show me the way to go home' which is another attempt to keep within the cage that is Sea Haven. We see baby pictures of Truman when he was a baby, one of these pictures were when the Truman and his family supposedly went to Mount Rushmore, His mother says that he slept the whole trip, but did he actually go to the trip, when Truman realises that Mount Rushmore seems a little small his mother quickly turns the page, knowing he is coming on to something. Another picture is Truman being held as a baby, what is peculiar is that he is being held with two hands, but how could they have taken the photo like that? It is very professional so it can't be a home picture, it could be the camera that might've been on a button on someone? He starts to take control and questioning the reality that he is contained in, first he goes into an elevator, but that has no backing ...read more.

Cristof is going to great lengths to stop Truman so he can get back the control that he has earned. They attempt to get a boat out there to get Truman, but no one can drive boat...'they're actors!' They calm the storm down, and let him continue his journey out to sea, but he gets to the end of the world...literally! The boat crashes in the side of the studio. Cristof, for the first time talks to Truman, telling him that the world out there is just like world he was raised in. but he will be safe in Sea Haven in his world he has 'nothing to fear' and that he 'was real'. The events of his life he refers to them as episodes- it is a TV. Show after all! But Truman does not expect the stories he is given, and gives the final of bow of the show of his life, and walks into the dark unknown that is the outside world. This film is telling us that society is controlled by one group of people; the media, they have the power to make someone famous and be heard, but they also have the power to destroy your reputation in a second, in The Truman Show, Cristof is God, as well as the media, Cristof made Truman famous, but Truman stopped him from being destroyed and defeated, Truman done what most people couldn't ever do even if they tried, he stepped up and fought for his freedom, this is what this film showing. ...read more.