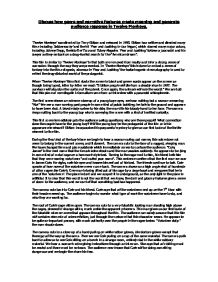 Discuss how genre and narrative features create meaning and generate audience response in Twelve Monkeys. 'Twelve Monkeys' was directed by Terry Gilliam and released in 1995. Gilliam has written and directed many films including 'Jabberwocky' and the hit 'Fear and Loathing in Las Vegas', which starred many major actors, including Johnny Depp, Benicio Del Toro and Tobey Maguire. 'Fear and Loathing' follows a journalist and his lawyer as they embark on a drug-fuelled search for the "American dream". This film is similar to 'Twelve Monkeys' in that both are removed from reality and infer a strong sense of surrealism through the way they are presented. In 'Twelve Monkeys' this is done to embed a sense of fantasy into the films diegesis, whereas in 'Fear and Loathing' the hallucinogenic cinematography is used to reflect the drug-distorted world of the protagonist. When 'Twelve Monkeys' films first starts the screen is black and green words appear on the screen as though being typed, letter by letter we read: "5 billion people will die from a deadly virus in 1997. The survivors will abandon the surface of the planet. Once again, the animals will rule the world." We are told that this piece of non-diegetic information came from an interview with a paranoid schizophrenic. ...read more.

We are given a close up of his hand turning a wheel and then the camera shows a light turn from red to green. The audience is given the impression that Cole has done this before as he seems to know exactly what he is doing. The door in front slowly opens to reveal a shadowy, misty space. We are shown a brief look of Cole looking apprehensive and then the camera tracks him through the door. The next shot shows metal bars moving quickly upwards past a wall, the audience suspect that this is a lift. We are then shown Cole facing the camera in the lift. The camera gives us an alternating feeling of being in the lift one second, and simply observing Cole the next. There is a final close up head shot of Cole looking nervous before the lift ride ends. Next we are shown a dark place with many pipes around the walls. Down a long passage we see what we assume to be Cole, although it is unclear because of the distance, he has a flashlight and is walking through this sewer type area. The camera then cuts to Cole's hand fumbling with something and then holding out a map. Cole looks around the place. ...read more.

La Jet�e was written and directed by Chris Marker and provided a strong basis for Gilliam's elaborated and slightly altered Twelve Monkeys. La Jet�e tells the story of a man who, along with fellow survivors, is forced to live underground in the aftermath of a nuclear war which left the surface of the earth uninhabitable. Experimenters begin researching time travel in the hope that they will be able to salvage some kind of future for themselves by traveling back into the pre-war world. The protagonist is a man who is sent back in time because of his memory of a man being shot at Orly airport when he was young. La Jet�e is a very unusual piece of film making as it uses only still shot photography, except for one shot where we see a character blink, and only non-diegetic sound which comes in the form of a voice-over by a narrator. The storyline of Twelve Monkeys is almost the same as La Jet�e, but with a few changes. In Twelve Monkeys, a virus was spread around the world which wiped out almost the entire human race and forced the survivors to live underground. Once again, animals freely roamed the earth and experimenters among the survivors invented a way to time-travel in the hope of being able to stop the virus from being spread by the unknown army of the Twelve Monkeys. ...read more.