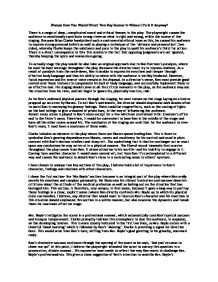 Discuss How You Would Direct Two Key Scenes in Whose Life Is It Anyway?

Discuss How You Would Direct Two Key Scenes in Whose Life Is It Anyway? There is a range of deep, complicated moral and ethical themes in this play. The playwright causes the audience to emotionally contribute strong views on what is right and wrong, within the course of the staging. Because Brian Clarke handpicked such a controversial ethical issue as this, he caused his audience to express strong personal beliefs as well as playing a technique of the 'defence and prosecution' (two sides), whereby Clarke keeps the substance and pace in the play to quell his audience's thirst for action. There is a direct consequence to this- this resides in the fact that opposing judgments are not ignored, thereby keeping the spice and momentum going. To actually stage the play would be also take an original approach due to Ken Harrison's paralysis, where he must be kept on-stage throughout the play (because the director must try to impress realism). As a result of paralysis from the neck-down, Ken is unable to express his emotions and temper through effective body language and thus his ability to relate with the audience is terribly hindered. However, facial expression and his tone of voice remain at his disposal. In a director's sense, Ken must preside good control over these features to compensate his lack of body language, and successfully implement these to an effective end. His staging should come at all the critical moments in the play, so the audience may see the situation from his view, and not begin to ignore his, physically inactive, role. As for Ken's awkward physical posture through the staging, he must remain on the stage laying on a bed or propped up on a rest by Nurses. To suit Ken's sentiments, the director should emphasise dark shades often to assist Ken is conveying his gloomy feelings. There could be stage-effects, such as the casting of lights on the bed railings to give a shadow of prison bars, in the way of influencing the audience. ...read more.

Clarke uses this as an opportunity to display Ken's obvious intelligence. 'Well there's another outburst. That should be your cue to comment on the light-shade or something...' Ken's renewed offensive should startle Mrs. Boyle because of its directness and if properly acted should also take the same toll on the audience. We should see Mrs. Boyle in a nervous disposition and her next response, 'I'm sorry if I've upset you' should be delivered in a shaky voice and a displaced tone to signal her anxiety and unease. However, Ken is unrelenting and continues to project his views. This is where Clark starts to rebuild the apprehension and suspense that leads to the finale, where Ken is furious. The build-up is very careful and thought-though; Ken manages to attack Mrs. Boyle from all sides, 'That's alright with me. Detach yourself...Christ Almighty...I say something offensive and you turn your professional cheek...Can't you see that this is why I've decided that life isn't worth living.' His remarks take a high emotional toll on Mrs. Boyle and she may well start to blush. The awfully personal and direct manner of his speech should be acted in a heavy handed way where Ken exercises a whole array of expressions, tones and emotions. He should try to reflect these succinctly and openly in an effort to grasp the audience and leave an impression. Obviously, all this leaves Mrs. Boyle quite speechless, 'I'm...please' and understandably frustrated by the unfair treatment Ken dishes out. Ken's emotions quickly boil over and should start shouting at Mrs. Boyle, 'Go...get out...get out...go on.' Rocking his head side to side would be an excellent way to convey his emotions, physically, because it would affect the audience in a different light, as he is totally impaired from the neck down and they automatically try to relate the minimalist of his actions to the a way an able person would act. ...read more.

This line should be delivered with a lot of aggression and spite. The bare answer he gets for that question is that it "was necessary". At this point the director would want to show that Dr. Emerson doesn't really need to explain his actions and illustrate this point by showing that Dr. Emerson still doesn't make any eye contact with Ken, but instead concentrates on the syringe and clearing up the "mess" created by this activity. Clark builds up to the climax of the scene as Dr. Emerson enters the room. He does not make eye contact or any effort to speak with Ken but goes straight for his arm. Any good director would have Dr. Emerson enter the room coolly and inject him with the needle. Even when he speaks to Ken, The director would have Dr. Emerson concentrating on Ken's arm or the syringe. The scene finishes with Ken going to sleep (...Ken is frustrated and then his eyes close). Prior to this, Ken states that the only thing that he still has the right to claim to use was his consciousness. At this point he also loses this right to it because more than one occasion Ken tells Dr. Emerson not to inject him with needle and he still does. And as a final stab, Emerson plays down the meaning of this when he is knows that its means more than just an injection to Ken; it means that he wants to show that he possesses control over his own treatment, his own will. Dr. Emerson crushes these hopes. Clark displays the ethical meaning in the play through many of the debates, apparent in almost every scene. These keep the audience interested and also cause them to reflect their own views. In this way, the director has a very important role to play as to present these debates in a manner that would retract the biggest reflection from the audience and generate, many varied opinions. Clark does well in presenting this in a dramatic form. ...read more.