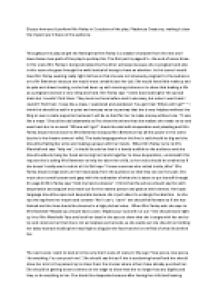 Discuss how youd perform Mrs Farley in 2 sections of the play, Playhouse Creatures, making it clear the impact youd have on the audience.

﻿Discuss how you?d perform Mrs Farley in 2 sections of the play, Playhouse Creatures, making it clear the impact you?d have on the audience. Throughout the play we get the feeling that Mrs Farley is a weaker character from the rest and I have chosen two parts of the play to portray this. The first part is pages 41 ? the end of scene three. In this scene Mrs Farley is being ostracized by the other actresses because she is pregnant and also in this scene she goes through the awful ordeal of trying to have an abortion. In this scene I would have Mrs Farley wearing really tight clothes so that she was not obviously pregnant to the audience or to Mr Betterton because she would most certainly lose her job. She would have little makeup and be pale and drawn looking, as she had been up with morning sickness or to show that leading a life as a pregnant woman is very tiring and hard. Mrs Farley says ?I went back looking for the special stairs but I couldn?t find them. ...read more.

asking Mrs Betterton to help her abort her child, so her voice should be strained as if she doesn?t really wan to ask at all. As Doll says ?I knew a woman who rotted inside, after? Mrs Farley should cringe and turn her head away from the audience so that they can see her pain. She must utter a small scream and gasp with the realisation of what she is about to put herself through. On page 43 Mrs Farley says ?hold my hand someone?. I think that the actress should say this with desperation and anguish and reach out for the nearest person and grab at their sleeves. Her body language should be open and desperate because she is just about to undergo the abortion. As she rips the rag from her mouth and screams ?No! I can?t, I can?t? she should fall forward as if she has fainted and the lines should be shouted in a high pitched voice. When Mrs Farley exits she says to Mrs Marshall ?Maybe you should have a care. Maybe your luck will run out.? She should stand right up in to Mrs Marshalls? face and look her dead in ...read more.

She should be acting slightly deranged and looking around the audience in a dazed manor as if she is away with the fairies. This shows she has lost all her pride in her appearance by not going to the theatre or acting any longer. It also suggests that she has nothing left to live for. Also the baby has tired her out so much that she is too tired to do the daily things like wash her face. This quote is also stating the obvious that she is now living on the streets so she is dirty and un savoury. The last line I think has real importance is ?I left it. Had to. Little white body. Laid it on some steps.? She should say this line slowly as if she is deranged and talking to herself. She should look suilty, perhaps looking up to the heavens as if to ask god to look after her child. Her facial expressions should be pained and distressed whilst she is remembering. In those days is was impossible for her to keep the child after leaving the theatre and in the end I think she has gone mad from the stress and horrific circumstances she has been through. ...read more.