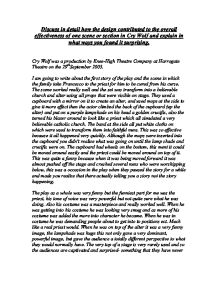 Discuss in detail how the design contributed to the overall effectiveness of one scene or section in Cry Wolf and explain in what ways you found it surprising.

Discuss in detail how the design contributed to the overall effectiveness of one scene or section in Cry Wolf and explain in what ways you found it surprising. Cry Wolf was a production by Knee-High Theatre Company at Harrogate Theatre on the 29thSeptember 2003. I am going to write about the first story of the play and the scene in which the family take Francesco to the priest for him to be cured from his curse. The scene worked really well and the set was transform into a believable church and alter using all props that were visible on stage. They used a cupboard with a mirror on it to create an alter, and used mops at the side to give it more effect then the actor climbed the back of the cupboard (up the alter) and put on a purple lampshade on his head a golden crucifix, also the turned his blazer around to look like a priest which all simulated a very believable catholic church. The band at the side all put white cloths on which were used to transform them into faithful nuns. ...read more.

It was very depressing much like Francesco was at the time wanting to be part of the sea and explore it. Francesco is one of those who choose to explore the darkness, the unknown. Throughout the play the actors use the wardrobe to enter a scene this is excellent as the cast can hide in the wardrobe and then suddenly burst out creating a genuine feel that the actors have just arrived some where else and it's not just a regular scene change. There is two doors to it one at the back the main door that would normally be on a wardrobe then one at the other side so the actors can get in and out. Mirrors work really well because they can be connected with an alternate world, at bit mysterious, hence using it to go from scenes and from backstage to the story. The family use the wardrobe to enter this scene with Francesco, he is constantly attached to the fathers hands and never sitting still, always moving with the father. This is a terrifying effect as this strange looking puppet seems to look and breathe and be aware of its surroundings, it always moves and its eyes had a effect that from where ever you were in the audience it looked like he was staring at you. ...read more.

This started from the obvious closeness of the company and expanded into the audience, at the end of the play u had a sense that you had just found about quite a lot about all the members of the cast. This group style of acting was echoed in the design and the way that the entire play came together, with everyone helping out the gather things and tell the stories. All aspects of design from the lighting to the music to the props came together in a different way to usual because in this piece each one directly affected and turned into the other on stage. The band became actors, the props became costume they went from telling a story, to talking about the story or going off about something else. This was why the play was effective in its use of strange props, set and acting. I enjoyed the play and loved the way they used the audience and made you accept everything that was happening on stage. As well as giving you a very good image of what was going on. Here is what the set was set up for this section involving the priest and Francesco being cured. By William Oliver ...read more.