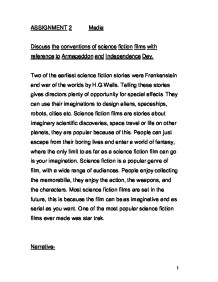 Discuss the conventions of science fiction films with reference to Armageddon and Independence Day.

ASSIGNMENT 2 Media Discuss the conventions of science fiction films with reference to Armageddon and Independence Day. Two of the earliest science fiction stories were Frankenstein and war of the worlds by H.G Wells. Telling these stories gives directors plenty of opportunity for special effects. They can use their imaginations to design aliens, spaceships, robots, cities etc. Science fiction films are stories about imaginary scientific discoveries, space travel or life on other planets, they are popular because of this. People can just escape from their boring lives and enter a world of fantasy, where the only limit to as far as a science fiction film can go is your imagination. Science fiction is a popular genre of film, with a wide range of audiences. People enjoy collecting the memorabilia, they enjoy the action, the weapons, and the characters. Most science fiction films are set in the future, this is because the film can be as imaginative and as serial as you want. One of the most popular science fiction films ever made was star trek. Narrative- All science fictions films follow a Set pattern, there is a peaceful world at the beginning of the story, and then a problem is created by a new type of technology, an alien world, or an unknown force. A hero takes on the job of saving the group threatened, which is a whole world, a town or a family. Difficulties arise in defeating the danger that creates tension and excitement for the audience, eventually there is a confrontation, the hero wins and order is restored. In Independence Day it starts with a peaceful world, the film begins with the American flag on the moon, there is then a close-up shot of the words 'world peace' this revels that the film starts off peacefully. A similar way is used in Armageddon as in Independence Day, as it begins you see the world from space, it looks peaceful but then the mood changes, you can tell that something is ...read more.

She is engaged to Captain Steven Hiller, and they have a son. During the film they get married. And like all princesses she needs to be saved by the hero. In Armageddon the princess is Grace Stamper, she is Harry Stampers daughter, and she is also engaged to A.J. Frost, but Harry does not agree with this. Harry feels like A.J is not good enough to marry his daughter. She loses her dad but marries A.J. Scientist- In all science fiction films there is a scientist. They usually help to save the day I one way or another. In Independence Day the scientist is Jeff Goldblum (David Levinson). He is very Environmentally friendly, and plays a big role in the movie. It's his plan to destroy the aliens, which saves the day and restores order to the world. He is kind and helpful throughout the duration of the film. In Armageddon there isn't really a scientist; NASA plays the role of the scientist in this film. What are the aliens like? (If there aren't any, in what way is the earth threatened by an unknown force?) In Independence Day there are aliens, whereas in Armageddon there aren't any. In Independence Day what you first see of the aliens is the large spaceships shadowing over the cities of the world. They are huge ships they look really technical and threatening. There are smaller spaceships as well which come from the larger spaceships they protect the ship when it gets attacked by the planes. There is also an invisible protective shield around the large spaceships, this stops any of the missiles and nukes reaching and damaging the main ship. Unlike in Armageddon where the earth is threatened by an asteroid the size of Texas, It is travelling at a speed fast enough to wipe-out the entire world and anything on it. It is a completely different story in Independence Day, the actual aliens themselves are frail, slimy, ugly, have lodes of tentacles, they are as fragile ...read more.

In both Armageddon and Independence Day similar lighting techniques are used. In these films a lot of low key lighting and high key lighting are used to create an atmosphere whether it being happy, sad, serious, scary, etc. In both of these films they also use a lot of lighting effects, these also have an impact on the audience. Things such as flashing lights, they can come from anything, like a flashing red light could mean danger. In both Armageddon and Independence Day there a lot of flashing lights used to show a technical failure in either the plane or spacecraft, there is a lot of low key lighting used with this, it creates tension. Suspense is also created, when it is dark and the flickering light, lights up the characters faces and shows how serious they are. In Independence Day there are a lot of lights on the spaceship, when the spaceship opens up a bright illumines blue light that shines down, and in Armageddon there are sparks of white light flickering off the equipment. Editing- The editing creates tension, excitement and suspense. It speeds up when something is going to happen. It also highlights the special effects and CGI in the film. In Armageddon some examples of the editing creating tension, excitement and suspense are when the asteroids hit earth the scenes speed up and create excitement, after the asteroids have hit the editing between the scenes of the destruction of down town New York and Paris. Then there is quick editing between lodes of different news stations, and then when they are preparing for the finial stages of lift off, and when the spacecraft crashes. All of these create tension, excitement and suspense for the audience. In Independence Day some of the examples are when the building get blown up, when the smaller spaceships attack the planes, when the government nuke the spaceships, and when there are the scenes of the whole world celebrating after the aliens are destroyed. Once again all of these create tension, excitement and suspense for the audience. 1 ...read more.