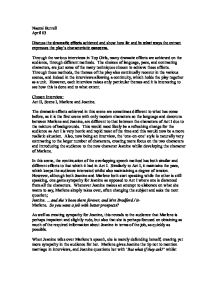 Discuss the dramatic effects achieved and show how far and in what ways the extract expresses the play's characteristic concerns.

Naomi Burrell April 03 Discuss the dramatic effects achieved and show how far and in what ways the extract expresses the play's characteristic concerns. Through the various interviews in Top Girls, many dramatic effects are achieved on the audience, through different methods. The choices of language, pace, and contrasting characters, are just some of the many techniques chosen to achieve these effects. Through these methods, the themes of the play also continually reoccur in the various scenes, and indeed in the interviews allowing a continuity, which holds the play together as a unit. However, each interview raises only particular themes and it is interesting to see how this is done and to what extent. Chosen Interview: Act II, Scene I, Marlene and Jeanine. The dramatic effects achieved in this scene are sometimes different to what has come before, as it is the first scene with only modern characters so the language and decorum between Marlene and Jeanine, are different to that between the characters of Act I due to the mixture of backgrounds. This would most likely be a refreshing change for the audience as Act I is very hectic and rapid most of the time and this would now be a more realistic situation. Also, now being an interview, the 'one-on-one' style is naturally very contrasting to the larger number of characters, creating more focus on the two characters and introducing the audience to the new character Jeanine whilst developing the character of Marlene. ...read more.

Another possible humorous moment is when they discuss the wedding ring and Marlene jokes; 'saves taking it off'. These would lighten the atmosphere, important after fast-moving, more serious passages in maintaining the audiences interest. As the play has now moved onto an interview situation, the play's theme of women in the world of work and the limitations and discrimination this poses, becomes more obvious for the audience. For example, Churchill uses the patronising character of Marlene and her language to portray this idea that marriage immediately implies having children for women and that this would affect their job; 'Does that mean you don't want a long-term job, Jeanine?'. The choice of addressing Jeanine by her name at this moment seems poignant as firstly, it has not been done since near the beginning of the scene and freshly reiterates the distance between the two characters and Marlene's character, and secondly being placed after a very presumptuous question effectively displays the frustrating issue of children interfering with work. Jeanine answers back with the short statement; 'I might do', which allows Marlene to continue; 'Because where do the prospects come in? No kids for a bit?'. It may be realistic to assume that not having children until later will be the only option if Jeanine wants a job with prospects, but the way Marlene shows where her thought pattern is leading with the implications of the first question, by saying two more questions just after, emphasises this theme that reoccurs throughout the play. ...read more.

This again shows her control and power over the situation and her ambitious nature. She even says; 'then you'll be in at the top with the new girls coming in underneath you,' which shows how important status and gaining a position as a woman was. Jeanine's character, although she is applying for a better job with better prospects, 'No, I do want a job with better prospects. I want more money,' therefore contrasts Marlene's, again emphasising the struggle of women for power. Jeanine is not always sure what she is trying to say and stutters trying to explain herself; 'Yes I know. I don't really... I just mean...' whereas Marlene knows she has her new position which, being above a man is all the more of an achievement, or so it would seem in their society. The extent to which the play's characteristic concerns are expressed is quite clear. It seems that the main issues here are; ambition, the attempt to gain control and power over others and to be a 'Top Girl', and the limitations of motherhood, in the world of work. This seems to be covered in an effective way due to the situation of an interview and in a fair degree of depth as it is directly addressed. However, little reference is made to men and rebellion against a patriarchal society, the treatment of women by men throughout history and media pressure to be thin, which are some of the other key themes. ...read more.