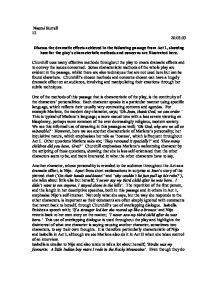 Discuss the dramatic effects achieved in the following passage from Act 1, showing how far the play's characteristic methods and concerns are illustrated here.

Naomi Burrell 12 20.03.03 Discuss the dramatic effects achieved in the following passage from Act 1, showing how far the play's characteristic methods and concerns are illustrated here. Churchill uses many effective methods throughout the play to create dramatic effects and to convey the issues concerned. Some characteristic methods of the whole play are evident in the passage, whilst there are also techniques that are not used here but can be found elsewhere. Churchill's chosen methods and concerns chosen can have a hugely dramatic effect on an audience, involving and manipulating their emotions through her subtle techniques. One of the methods of this passage that is characteristic of the play, is the continuity of the characters' personalities. Each character speaks in a particular manner using specific language, which reflects their usually very contrasting contexts and agendas. For example Marlene, the modern day character, says; 'Oh Joan, thank God, we can order.' This is typical of Marlene's language; a more casual tone with a less severe viewing on blasphemy, perhaps more common of the ever decreasingly religious, modern society. We see this informal use of swearing in this passage as well; 'Oh God, why are we all so miserable?' However, here we see another characteristic of Marlene's personality; her inquisitive nature, which emphasises her role as 'hostess', which is frequent throughout Act I. ...read more.

The idea that they are in a restaurant is maintained in this way, as she is a constant reminder. The fact that there is little interaction like 'please' or 'thank you' also highlights the fact that many of the characters come from an aristocracy and are used to being served. This gives the audience a slightly deeper insight to their backgrounds. Stage directions for entrances of characters are important as they create reactions in the other characters, or indeed do not. It is in this passage that this is obvious as GRISELDA arrives unnoticed. It is only after they finish the conversation that Marlene notices her. Although it could just be that the characters are very involved in the humorous discussion that is happening, it is more likely that Churchill specifically chooses this moment for Griselda's entrance so that the audience wonder who she is and her significance. In other passages, first impressions of characters are made on both their appearance and by what they first say, for example the more elaborate entrances of and reactions to Joan and Gret, but here the audience has a short time, (if they do notice her at all) to make an initial judgement. Another form of humour apart from Gret's monosyllabic utterances and the characters' drunken giggles and 'chat' is bathos. ...read more.

Indeed, they may even feel moved to be charitable or do something else that is referred to, themselves as the pressure continues throughout the play as a key theme. The final main theme that is addressed in the passage is motherhood, one that is discussed in depth in other parts of Act I. The characters each talk about their children in very different ways, reflecting their contexts. Nijo explains how she saw her daughter only once, and the thing she mentions is her clothes, showing how materialistic she is. She then talks about how the child was simply taken away, which in most of the other characters' contexts would seem totally bizarre. This also highlights the theme of how women were treated differently by men throughout history, often very badly. So whilst giving the audience many issues to think about, the background and attitudes of the different women are also developed, perhaps sometimes due to this, even creating sympathy for some of the more oppressed characters. Several key themes of the play, all of which probably make the audience think, are addressed within this passage. They are characteristic of the play as they are addressed elsewhere, although here we learn particularly about Nijo in terms of motherhood, Isabella and her aspirations and successes at her idea of a 'Top Girl' and Marlene's awareness of media pressure. ...read more.