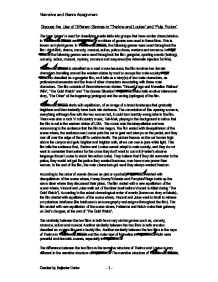 Discuss the Use of Different Genres in 'Thelma and Louise' and 'Pulp Fiction' The term 'genre' is used for classifying media texts into groups that have similar characteristics. In Thelma and Louise and Pulp Fiction, a mixture of genres was used in these films. This is known as hybrid genre. In Thelma and Louise, the following genres were used throughout the film: chick-flick, drama, comedy, musical, action, police chase, western and romance. In Pulp Fiction, the following genres were used throughout the film: gangster, sporting events (boxing), comedy, action, musical, mystery, romance and suspense (the Adrenalin injection for Mia). Thelma and Louise is classified as a road movie because; the film involves two female characters travelling around the western states by road to escape the male society. Pulp Fiction is classified as a gangster film, as it tells us a story(s) of two male characters, as professional assassins and the lives of other characters associating with these main characters. The film consists of three interwoven stories: "Vincent Vega and Marsellus Wallace' Wife", "The Gold Watch" and "The Bonnie Situation". Pulp Fiction also tells another interwoven story, "The Diner" at the beginning (prologue) ...read more.

I have carried out research on this character and found out that his name is taken from the movie star James Dean, which symbolically represents his importance. In the film, JD plays as the young attractive rebel, like James Dean. In Pulp Fiction, the scene at Jack Rabbit Slim's, we saw a number of waiters and waitresses dressed as dead icons from 1950's and 1960's- Buddy Holly, Marilyn Monroe, Zorro, James Dean, Donna Reed, Martin Lewis etc. Based on Vladimir Propp's theory, Louise is the heroine in Thelma and Louise, because she saves Thelma from the rapist, Harlan who is the villain in the film. Another villain in the film is JD, who stole the money from Thelma and told the police where they were going to. The donor is Thelma because, she brought the pistol with her and this pistol plays the important part in the film (e.g. murder, robbery, shooting air holes in policeman's trunk, etc). I think Harlan is the dispatcher because after his death, the women were forced to runaway from the incident. Thelma and Detective Hal are the helpers in the film. There is no princess in the film but, at the end of the film, Thelma and Louise (heroine) got their reward, which is freedom. (Word Count: 1,242 words) ?? ?? ?? ?? Narrative and Genre Assignment Created by Baljinder Duhra - 1 - ...read more.