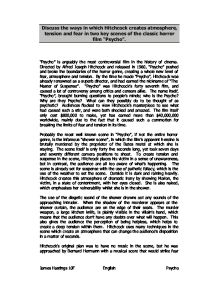 Discuss the ways in which Hitchcock creates atmosphere, tension and fear in two key scenes of the classic horror film &quot;Psycho&quot;.

Discuss the ways in which Hitchcock creates atmosphere, tension and fear in two key scenes of the classic horror film "Psycho". "Psycho" is arguably the most controversial film in the history of cinema. Directed by Alfred Joseph Hitchcock and released in 1960, "Psycho" pushed and broke the boundaries of the horror genre, creating a whole new level of fear, atmosphere and tension. By the time he made "Psycho", Hitchcock was already renowned as a superb director, and had earned the nickname of "The Master of Suspense". "Psycho" was Hitchcock's forty seventh film, and caused a lot of controversy among critics and censors alike. The name itself, "Psycho", brought burning questions to people's minds; who is the Psycho? Why are they Psycho? What can they possibly do to be thought of as psychotic? Audiences flocked to view Hitchcock's masterpiece to see what had caused such a stir, and were both shocked and amazed. The film itself only cost $800,000 to make, yet has earned more than $40,000,000 worldwide, mainly due to the fact that it caused such a commotion for breaking the limits of fear and tension in its time. ...read more.

Hermann used "shrill, stabbing thrusts of the strings", which created a stabbing effect. Although strings were typically associated with romance, Hermann felt that they would match the black and white photography and therefore created a 'black and white sound'. The music anchors meaning onto the images, and the pitch becomes lower and slower to emphasise Marion's demise. It also causes the audience to 'jump' considerably because it starts as suddenly as the killer appears. In the scene, the director uses over seventy camera shots which give a feeling of panic and confusion because they are in quick succession and from seventy different angles. Hitchcock makes good use of the high angle shot because it shows what is happening and makes the victim look smaller and consequently weaker and more exposed. He uses mid-close up shots which concentrate on the victim's mouth to show the audience her fear. There are shots of Marion's hand on the plain white bathroom tiles, slowly slipping down them and representing the victim trying to cling on to her life which is slowly slipping away. ...read more.

The voice itself is that of a twisted old woman; sweet and innocent, but evil and sinister at the same time. There is also non diegetic music in the scene which is off-beat and ominous and puts the audience on edge. The camera pans in as the voice reveals itself and concentrates on Norman's face. The 'mother' explains how it has taken over Norman's mind, and tells the audience how, "I'm not even going to swat that fly. I hope they are watching. They'll see. They'll see, and they'll know, and they'll say... "(as he slowly raises his eyes to meet the audience's, smirking) "Why, she wouldn't even harm a fly!" The way the line is given is extremely disturbing, and proves that the 'mother' is responsible for the murders committed by the unaware but faithful Norman. In the final seconds of the scene, Norman bows his head, keeping eye contact with the audience, and gives them a spine-chilling smile. The shot then fades the skull of Norman's mother into the face of Norman, which does not only create fear and tension; it signifies the final change from Norman into 'mother'. ?? ?? ?? ?? James Hastings 10F English Psycho ...read more.