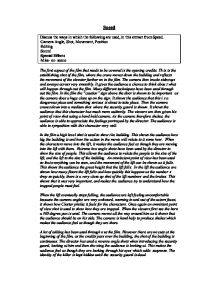 Discuss the ways in which the following are used, in this extract from Speed, Camera Angle, Shot, Movement, Position, Editing, Sound, Special Effects, and Mise- en- scene.

Speed Discuss the ways in which the following are used, in this extract from Speed. �Camera Angle, Shot, Movement, Position �Editing �Sound �Special Effects �Mise- en- scene The first aspect of the film that needs to be covered is the opening credits. This is the establishing shot of the film, where the crane moves down the building and reflects the movement of the elevator further on in the film. The camera then tracks sideways and swoops across very smoothly. It gives the audience a chance to think about what will happen through out the film. Many different techniques have been used through out the film. In the film the "caution" sign above the door is shown to be important as the camera does a huge close up on the sign. It shows the audience that this is a dangerous place and something serious is about to take place. Then the camera cranes down into a medium shot where the security guard is shown. It shows the audience that this character has much more authority. The viewers are then given his point of view shot using a hand held camera. As the camera therefore shakes, the audience is able to appreciate the feelings portrayed by the director. The audience is able to sympathize with this character very well. ...read more.

This makes the audience feel as though they are looking through his eyes which adds suspense. The identity of the killer is kept hidden until the security guard is dead. The main focus is on the killer's hand, which has a thumb missing. This has been edited so that the audience look at his hand and know that he is the bad guy in the film because he is disfigured in some way. There is no build up to the stabbing, so the audience are left feeling awkward and uncomfortable and do not know what to expect next. The quick shots tell the viewers that Dennis Hopper cannot be trusted; he is also known to be a psychopathic cold blooded killer in other films. Editing has been used to create a juxtaposition shot where the killing contrasts to people in the offices flirting and laughing, if shows the audience that no one knows what is going on. Editing has been used to show the height of the building which helps the audience comprehend the vast size of the offices. When the lift is falling, cut shots are used to add dramatic ness and makes is visually more interesting as it makes it difficult for the audience to keep up with. The explosions in the film have also been edited; the reaction of the people in the film can be shared with the reaction of the audience in which they are left being unsure of what will happen next. ...read more.

Ambient background is used through out, it makes the film sound more real. The audience may think that it is an abandoned car park or some place underground after listening to just the music as it's more based on dialogue and background noises. People are shown to be rather noisy in an office environment which shows the viewers that this could be a real situation. Fire engines are introduced using uneasy music which then goes silent. The mise-en-scene of the film shows how the security guard is very vulnerable. He is just doing what he is meant to be doing when he is interrupted by the killer. The colours used on the film are dark and dull; this shows the audience it is a cold film which is meant to be uncomfortable to watch. A blue colour has been used for low contrast. In the lift an orange/ yellow has been used to show that people feel Closter phobic in the lift. The warmer colours represent how compact the lift is. The people in the film show chaos and that they are shocked when the bomb goes off. The props used in the film used the screwdriver used by the killer to kill the security guard. Because the security guard does not know that it is there, where as the audience can feel as though he is hiding something. The film shows the audience how no one can help when the actors are in trouble until the hero arrives. ...read more.