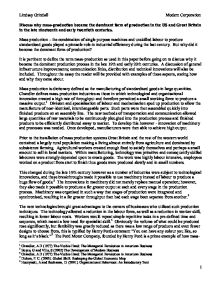 Discuss why mass-production became the dominant form of production in the US and Great Britain in the late nineteenth and early twentieth centuries.

Discuss why mass-production became the dominant form of production in the US and Great Britain in the late nineteenth and early twentieth centuries. Mass production - the combination of single purpose machines and unskilled labour to produce standardised goods played a pinnacle role in industrial efficiency during the last century. But why did it become the dominant form of production? It is pertinent to define the term mass-production as used in this paper before going on to discuss why it became the dominant production process in the late 19th and early 20th centuries. A discussion of general infrastructure improvements; communication links, distribution and technical innovations will also be included. Throughout the essay the reader will be provided with examples of these aspects, stating how and why they came about. Mass production is dictionary defined as the manufacturing of standardised goods in large quantities. Chandler defines mass-production industries as those in which technological and organisational innovation created a high rate of throughput and therefore permitted a small working force to produce a massive output.1 Division and specialisation of labour and mechanisation sped up production to allow the manufacture of near-identical, interchangeable parts. Such parts were then assembled quickly into finished products on an assembly line. The new methods of transportation and communication allowed large quantities of raw materials to be continuously ploughed into the production process and finished products to be efficiently distributed away to market. To develop this however - innovation of machinery and processes was needed. Once developed, manufacturers were then able to achieve high output. Prior to the installation of mass production systems Great Britain and the rest of the western world contained a largely rural population making a living almost entirely from agriculture and dominated by subsistence farming. ...read more.

reach.12 As well as being a key player in the new distribution networks, the railways also played an important role in shaping future business structures. They represented 'the first modern enterprise' in the sense that they lead the field in developing hierarchical administrative structures, which were run by salaried managers, rather than just business owners. In addition the control of operations was through a new sophisticated internal information system in the railways. This method was adopted by the new businesses that emerged after this time.13 Boyce and Ville stated that railways played a vital role in the distribution of goods, as well as providing a framework for future businesses to utilise. They developed a cheap and reliable service, as well as reducing market uncertainty, making the market less vulnerable to acute demand fluctuations. Furthermore the railway stations stimulated urban development around them; this led to the development of new department stores. Goods were able to be quickly and easily moved from stations to the stores, thus minimisation of movement allowed quick co-ordination and integration. Other methods of communication were also involved in the success of mass production. Canals, like the railways, were vital in the development of transport, though this role was nowhere near as influential as that of the railways. The canals provided another method of bulk transportation and did provide the economy with a viable infrastructure. However they were limited by terrain, and also speed, meaning that their influence would never rival that of the railroads. Their part in developing business and also mass-production should not be under-estimated however; for example the Erie Canal had a major impact on economic development westward in the USA. ...read more.

Mass production techniques however did not offer these forms of motivation to the workforce. Skilled labourers were forced to carry out unskilled repetitive tasks in a dead-end job. They stayed purely for the monetary remuneration with little regard for organisational goals and no motivation. This led to low levels of output from each worker resulting in decreased productivity for the firm over all. Other problems came from the introduction of assembly lines. It was impractical to rely on machinery to complete tasks, as the equipment had only just been invented and mechanical faults were still apparent. The failure of a machine half way through the production process would result in production grinding to a halt until that machine was fixed. This caused productivity to fall and costs to rise, demonstrating another inefficiency caused by mass production. However mass production techniques did aid the problems faced with a growing organisation and helped direct the efforts of the first mass workforce, whilst still allowing firms to produce large quantities of products at low costs. Mass-production emerged as the dominant industry due to inter-related features of supply and demand. On the supply side technical innovation, organisational restructuring and better communication and transport links served up the components for the development of mass-production. The railways, canals and the telegraph helped bring together markets, whilst the technical and organisational innovations allowed the production of goods to suit these markets. On the demand side an increasing population, more concentrated markets, and firms marketing strategies all acted as stimulants. This new, increased demand could only be met through the methods of mass production at the time; it met both the supply and demand requirements which is why it dominated production in the late nineteenth and early twentieth centuries. ...read more.