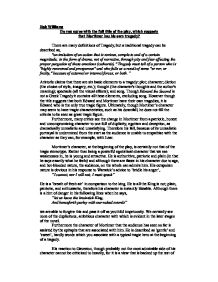 Do you agree with the full title of the play, which suggests that Mortimer has his own tragedy?

Rob Williams Do you agree with the full title of the play, which suggests that Mortimer has his own tragedy? There are many definitions of Tragedy, but a traditional tragedy can be described as, "an imitation of an action that is serious, complete and of a certain magnitude; in the form of drama, not of narrative, through pity and fear effecting the proper purgation of these emotions (catharsis)." Tragedy must tell of a person who is "highly renowned and prosperous" and who falls as a result of some "error, or frailty," because of external or internal forces, or both." Aristotle claims that there are six basic elements to a tragedy: plot; character; diction (the choice of style, imagery, etc.); thought (the character's thoughts and the author's meaning); spectacle (all the visual effects); and song. ...read more.

Furthermore, many critics see the change in Mortimer from a patriotic, honest and uncompromising character to one full of duplicity, egotism and deception, as dramatically unrealistic and unsatisfying. Therefore his fall, because of its unrealistic portrayal is undermined from the start as the audience is unable to empathise with the character as they can, for example, with Lear. Mortimer's character, at the beginning of the play, is certainly not that of the tragic stereotype. Rather than being a powerful egotistical character that we see weaknesses in, he is young and attractive. He is authoritive, patriotic and plain (in that he says exactly what he feels) and although there are flaws in his character due to age, and hot-blooded nature, the audience, on the whole can admire him. ...read more.

We certainly see none of the duplicitous, ambitious character with which is evident in the later stages of the novel. Furthermore the character of Mortimer that the audience has seen so far is assisted by the epitaphs that are associated with him. He is described as 'gentle' and 'sweet', hardly words which you associate with a typical tragic hero at the beginning of a tragedy. His reaction to Gaveston, though probably not the most admirable side of his character cannot be criticised to heavily, for it is a view that is backed up the rest of the nobles. He significantly sees Gaveston as a "peevish French", his dislike of Gaveston does not stem from his sexuality, rather from the threat he poses to the stability of his country, and though he is once again rash when he says "Unless his breast be-sword plated" the audience can see the reasoning behind his motives. ...read more.