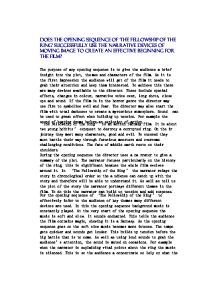 Does the opening sequence of 'the fellowship of the ring' successfully use the narrative devices of moving image to create an effective beginning for the film?

Does the opening sequence of 'the fellowship of the ring' successfully use the narrative devices of moving image to create an effective beginning for the film? The purpose of any opening sequence is to give the audience a brief insight into the plot, themes and characters of the film. As it is the first impression the audience will get of the film it needs to grab their attention and keep them interested. To achieve this there are many devices available to the director. These include special effects, changes in colour, narrative voice over, long shots, close ups and sound. If the film is in the horror genre the director may use fire to symbolise evil and fear. The director may also start the film with total darkness to create a mysterious atmosphere. ...read more.

From watching the opening sequence the audience gets the impression the film is going to be full of action and magic. Thus making it an action fantasy genre. The huge physical battle at the start of the film sets it up perfectly. Straight away the audience can see the film will contain many battles with swords and shields. The narrator's explanation of the containing magic tells the audience there will be many happenings in the film where the audience will need to use their imagination. The opening sequence for 'The Fellowship of the Ring' gives a brief insight of what is to come. The director uses the devices available to build tension and portray key themes in the film. After the narrators speech the audience is able to understand the plot and is prepared for the rest of the film. These elements combine to make a successful opening sequence. ...read more.