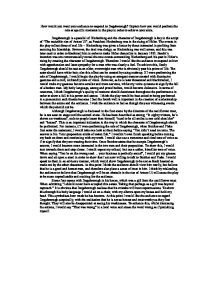 Dogsborough is a parallel of Hindenburg and the character of Dogsborough is key in the script of &quot;The resistible rise of Arturo Ui&quot;, as President Hindenburg was in the rising of Hitler. The events in the play reflect those of real life

How would you want your audience to respond to Dogsborough? Explain how you would perform the role at specific moments in the play in order to achieve your aims. Dogsborough is a parallel of Hindenburg and the character of Dogsborough is key in the script of "The resistible rise of Arturo Ui", as President Hindenburg was in the rising of Hitler. The events in the play reflect those of real life - Hindenburg was given a house by those interested in profiting from securing his friendship. However, the deal was dodgy, as Hindenburg was well aware, and this was later used in order to blackmail him in order to make Hitler chancellor in January 1933. Brecht's intention was too controversially reveal the true events surrounding Hindenburg and his part in Hitler's rising by creating the character of Dogsborough. Therefore I would like the audience to respond to him with apprehension and later sympathy for a man who was clearly a fool. ...read more.

I wish the audience to feel as though they are witnessing events which they should not be. Although Dogsborough is discussed in the first scene by the directors of the cauliflower trust, he is not seen on stage until the second scene. He has been described as strong; "In eighty winters, he's shown no weakness", rude to people lesser than himself; "used to be all smiles is one cold shoulder" and "honest". This is an important indication in the way in which the character of Dogsborough should be performed. For instance, if I were performing the role of Dogsborough, when Butcher and Flake first enter the restaurant, I would take one look at them before saying "You didn't need to come. The answer is No. Your proposition stinks of rotten fish." I wouldn't even finish speaking before turning my back on them and continuing with my work. ...read more.

I think by misleading the audience to believe that Dogsborough will be an obstacle in the rise of Arturo Ui will cause the play to be more unpredictable and exciting for the audience. Scene four opens with Dogsborough in his house, which was a gift from the cauliflower trust. When admitting "I should never have accepted this estate. Taking that package as a gift was beyond reproach." It is obvious that Dogsborough realises that his mistake will have repercussions. To show this through his body language I would sit on a chair, with my elbows upon my knees and hold my head. This symbolises how weak he has become. At this point I would like the audience to regard Dogsborough sceptically, with the realisation that he is not as honest and trustworthy as they first thought. They will also be disappointed at seeing his weaknesses. To enhance this, whilst discussing his actions, I would say "That was wrong" in a loud voice and stress the word wrong as if punishing myself. ...read more.