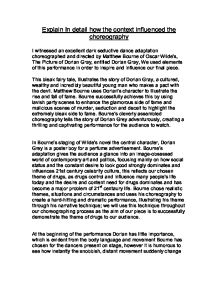 Dorian Gray - Explain In detail how the context influenced the choreography.

Explain In detail how the context influenced the choreography I witnessed an excellent dark seductive dance adaptation choreographed and directed by Matthew Bourne of Oscar Wilde's, The Picture of Dorian Gray, entitled Dorian Gray, We used elements of this performance in order to inspire and influence our final piece. This bleak fairy tale, illustrates the story of Dorian Gray, a cultured, wealthy and incredibly beautiful young man who makes a pact with the devil. Matthew Bourne uses Dorian's character to illustrate the rise and fall of fame. Bourne successfully achieves this by using lavish party scenes to enhance the glamorous side of fame and malicious scenes of murder, seduction and deceit to highlight the extremely bleak side to fame. Bourne's cleverly assembled choreography tells the story of Dorian Grey adventurously, creating a thrilling and captivating performance for the audience to watch. In Bourne's staging of Wilde's novel the central character, Dorian Grey is a poster boy for a perfume advertisement. Bourne's adaptation gives the audience a glance into an image-obsessed world of contemporary art and politics, focusing mainly on how social status and the constant desire to look good strongly dominates and influences 21st century celebrity culture, this reflects our chosen theme of drugs, as drugs control ...read more.

The theme of violence was a dominate theme throughout the performance, the lighting was dark and mysterious, creating an eerie, uncertain atmosphere within the audience. The costumes used to represent this theme were dull and simple, allowing the audience to focus purely on the choreography and not get distracted by the costumes. Bourne's key features to enhance this theme were, blood against a dull background an evil and good twin to show the contrast in Dorian's personality, expressing that there is good in everyone or that there is two sides to every story. Bourne used fast paced movements, making violent scenes exciting sending an adrenaline rush through the audience, and Borne had also used appropriate expression and contact movement, like we did in our piece. All these techniques's Bourne has used came together successfully, allowing the audience to easily distinguish the subject matter and the theme of this section. Another important theme in Dorian Gray was obsession. This theme was obvious to the audience, due to use of smothering, lingering, over lapping, intertwining, movement. Also the fact that Dorian was the only character on stage wearing a white suit, whilst all the other dancers were wearing black, highlighted the fact that Dorian was the most important character on stage and that everyone wanted to be around him. ...read more.

We also chose a hard-hitting theme which alone reflected Bourne's work as his themes are deep and extreme, for example Dorian Gray embodies the themes of violence, obsession, deceit, sexuality, drug abuse and murder. Attending a Pre Show talk, delivered by Matthew Bourne himself allowed me to understand in more detail the concept and the incentive behind Bourne's new adaptation and the story and meaning behind Bourne's choreography whilst watching the performance. During this talk Bourne confessed that he loosely based Dorians character on a the late actor Heath Ledger stating, 'He ended up in isolation, a lonely man in New York with everyone giving him stuff to help him to get through it. And what happened? He ended up dead." The pre show talk helped me disguise what parts of the performance reflected Heath Ledgers life. The most prominent scene is the very last scene, where Dorian takes his own life, however the last scene also links in with the double life concept, as Bourne uses a twin to visually differentiate between the two lifestyles, and this is another clever choreographing technique in order to tell the story. I feel we studied Bourne's choreographing techniques well and have successful incorporated Bourne's method's of illustrating his themes to the audience through, costume, lighting, key features, positioning, movement and exaggerated motion. ...read more.