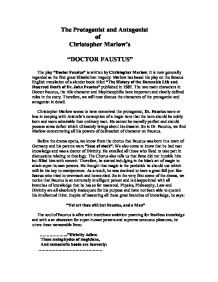 The Protagonist and Antagonist of Christopher Marlow's "DOCTOR FAUSTUS" The play "Doctor Faustus" is written by Christopher Marlow. It is now generally regarded as the first great Elizabethan tragedy. Marlow has based his play on the famous English translation of a slender book titled "The History of the Damnable Life and Deserved Death of Dr. John Faustus" published in 1587. The two main characters in Doctor Faustus, the title character and Mephistophilis have important and clearly defined roles in the story. Therefore, we will now discuss the characters of the protagonist and antagonist in detail. Christopher Marlow seems to have conceived the protagonist, Dr. Faustus more or less in keeping with Aristotle's conception of a tragic hero that the hero should be nobly born and more admirable than ordinary men. He cannot be morally perfect and should possess some defect which ultimately brings about his disaster. So in Dr. Faustus, we find Marlow concentrating all his powers of delineation of character on Faustus. Before the drama opens, we know from the chorus that Faustus was born in a town of Germany and his parents were "base of stock". We also come to know that he had vast knowledge and was a doctor of Divinity. He excelled all those who liked to take part in discussions relating to theology. The Chorus also tells us that fame did not humble him but filled him with conceit. Therefore, he started indulging in the black art of magic to attain super-human powers. He thought that magic is the yardstick he should use which will be his key to omnipotence. As a result, he was destined to have a great fall just like Icarus who tried to overreach and hence died. ...read more.

He is also a man of extremes. Throughout the play, he exhibits extremes of laughter to depths of despair. Faustus's own pleasant vices turn into instruments to plague him. The last scene in which Faustus is torn between conflicting feelings is the best of its kind, the most poignant in English tragedy. In this scene we find the human in him begging for relief as his soul would be handed in to Lucifer according to the contract. It is a truth that one is always alone in his suffering and Faustus's fate is no different. No response is there to his cries of anguish and his appeals for mercy. We can vividly see a descent in his character from pride and arrogance to supplication. Instead of the flaunting and bragging Faustus, he is now the scared and crouching Faustus. His impulsive nature can be considered the root cause of his downfall because he could be swayed easily. There is no more salvation for him, only damnation. As the clock strikes twelve, Faustus is borne away to hell by the devils. It is in his final awareness that consumed by his own sense of overreaching. He has isolated himself from both his fellowmen and from his God. It is this awareness that makes Faustus human and helps him achieve the status of a tragic hero. However, it is interesting to note how in Faustus the scholar never disappears in magician. He is ever a student and a thinker as he wants all ambiguities to be resolved and all strange philosophies explained. Hence, we can say that Marlow's Dr. Faustus is, as Nicoll suggests: ".........unquestionably the greatest tragic figure in sixteenth century literature outside the work of Shakespeare." ...read more.

True to his promise, Mephistophilis remains loyal to Faustus, follows him in his aerial flight from place to place and does his bidding obediently. It is he again, that explains to Faustus the secrets of the elements, the spheres and other allied details. Thus, Marlow's Mephistophilis is a commonplace drudge of the internal powers. The first time when he appears in the play, he impresses us by his quiet dignity. He speaks as one who has come not over-willingly and with no desire to inveigle. He replies to Faustus's eager questioning are almost wearily abrupt. All the same he cannot help to restrain his tragic passion and burst fort: "For when we hear one rack the name of God, Abjure the scriptures and his Saviour Christ, We fly in hope to get his glorious soul;" We can see the signs of Mephitophilis's remorse and passion which are evident in the following lines: "Think'st thou that I, who saw the face of God, And tasted the eternal joys of Heaven, Am not tormented with ten thousand hells: In being depriv'd of everlasting bliss? O Faustus, leave these frivolous demands, Which strike a terror to my fainting soul." These signs of remorse and passion are Marlow unique creation. However, Mephistophilis's motives are perceptibly ambiguous throughout "Doctor Faustus", he seemingly alternates between a typically gleeful medieval devil, and a romantically suffering fallen angel. Concluding, we can say that the way Christopher Marlow has portrayed the protagonist and antagonist of the play are aesthetically appealing. This clearly projects his mastership in crafting such magnificient characters like Dr. Faustus and Mephistophilis. Hence, the way he has presented these characters to us is highly applaudable and is worth every ounce of adulation. ...read more.