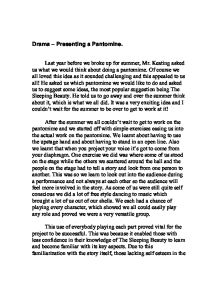 Drama - Presenting a Pantomine. Last year before we broke up for summer, Mr. Keating asked us what we would think about doing a pantomime. Of course we all loved this idea as it sounded challenging and this appealed to us all! He asked us which pantomime we would like to do and asked us to suggest some ideas, the most popular suggestion being The Sleeping Beauty. He told us to go away and over the summer think about it, which is what we all did. It was a very exciting idea and I couldn't wait for the summer to be over to get to work at it! After the summer we all couldn't wait to get to work on the pantomime and we started off with simple exercises easing us into the actual work on the pantomime. We learnt about having to use the upstage hand and about having to stand in an open line. Also we learnt that when you project your voice it's got to come from your diaphragm. One exercise we did was where some of us stood on the stage while the others we scattered around the hall and the people on the stage had to tell a story and look from one person to another. This was so we learn to look out into the audience during a performance and not always at each other so the audience will feel more involved in the story. ...read more.

As we had two casts we wicked roles all had to work closely together so the two different performances still had the same interpretation we were all happy about. I have to admit that I wasn't sure how it was going to all fit together and if we would carry it off, as we seemed to argue a lot about how exactly we were going to do each scene but luckily we started to accept other people's ideas and tried different things out. I feel that this acceptance became very important for the whole group as it then enabled us to bond with great ease. As we became more experienced in working with specific people, we began to see things on their level. This allowed us to put together ideas with had an overall positive effect on the whole production. This closeness within the group meant that more time could be spent learning helpful techniques from other members of the group instead of arguing. Whilst the group was practicing on stage, we realized that our gestures were not large enough to create the strong impact that we would need. In order for our actions to be a success, there would have to be a change. This problem was soon resolved as we looked back to previous techniques we had used which were simple and effective. We adapted these methods into our actions and we soon received the effect that we had hoped for. ...read more.

As the performance progressed I just enjoyed it more and more and there was never a time where I was worrying really every thing just seemed to flow smoothly. I was lost in my character. I loved every minute of it and it seemed to be over so quickly! The performance built itself up throughout, You give something to the audience and they respond and you get it back and then the end comes and its like an explosion of emotions! There wasn't one point where the audience didn't seem to enjoy it, they played a big part in this pantomime because without them we couldn't of done it! Also without such a lively audience I feel we couldn't of done it as well as we did! This production has affected me greatly. I feel I am more aware of how a production is put together and how achieving it is. It has also brought me closer to people in my drama group that I wasn't too close to before. I love the feeling of being onstage, it is my favourite feeling in the world! I would love to carry on and do lots more performances in my life. If I could do this pantomime again I would jump at the chance. It was a challenging project but it was worthwhile in the end! This experience is something that I will never forget and I am very thankful to Mr. Keating and everyone in my drama group, as without them the pantomime wouldn't have been possible. ?? ?? ?? ?? ...read more.