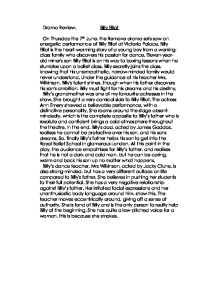 Drama Review. Billy Elliot On Thursday the 7th June, the Remove drama sets saw an energetic performance of Billy Elliot at Victoria Palace. Billy Elliot is the heart-warming story of a young boy from a working-class family who discovers his passion for dance. Eleven-year-old miner's son Billy Elliot is on his way to boxing lessons when he stumbles upon a ballet class. Billy secretly joins the class, knowing that his unsympathetic, narrow-minded family would never understand. Under the guidance of his teacher Mrs. Wilkinson, Billy's talent shines, though when his father discovers his son's ambition, Billy must fight for his dreams and his destiny. Billy's grandmother was one of my favourite actresses in the show. She brought a very comical side to Billy Elliot. ...read more.

She has a very negative relationship against Billy's father. Her irritated facial expressions and her unenthusiastic body language around him, show this. The teacher moves eccentrically around, giving off a sense of authority. She is fond of Billy and is the only person to really help Billy at the beginning. She has quite a low-pitched voice for a woman, this is because she smokes. Drama Medium Billy Elliot was performed in a Proscenium arched theatre. The stage and set were very clever, and were used specifically to use the most of the space available o n the stage. There was a plane black backdrop and backstage exits to the left and right. The Set was great, and mainly consisted of two trap doors, which contained a dining table and a set of chairs, and the other contained a flight of stairs, with a small kitchen attached, leading to Billy's bed. ...read more.

The lighting was generally a bright lit up stage. The most interesting lights used were in the Police raid scene, which had blue tinted lights and a smoke machines were used. Also, when Billy was angry and upset about his father and brother forbidding him from ballet, the lights went red to represent his rage. There was not many special effect sounds, only in the police raids. The music used in Billy Elliot was mainly during the dancing scenes, and when Billy was practising his dance steps. The space on the stage was used efficiently and so were the levels. The more powerful characters were higher up, like when Billy had finished his dance and performed, he used a harness to fly up high to show he could dance no matter what anyone else says. I really enjoyed Billy Eliot, especially the dancing. It was very interesting how the stage was set and the actors were very good. ...read more.