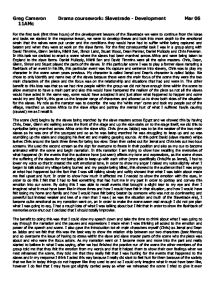 Drama coursework: Slavetrade - Development Mar 06 11AMc For the first task (first three hours) of the development lessons of the Slavetrade

Greg Cameron Drama coursework: Slavetrade - Development Mar 06 11AMc For the first task (first three hours) of the development lessons of the Slavetrade we were to continue from the ideas and tasks we started in the response lesson, we were to develop theses and look into more depth to the emotional strain that the salves were put under and the conditions they would have had to suffer whilst being captured and beaten and when they were at work on the slave farms. For the first consequential task I was in a group along with David Timmins, Glenn Jenkins, Nikhil Sen, Simon Laird, Stuart Wood, Dean Parmar, Daniel Mullooly and Chris Freeman. In this task we decided to enact a scene where the slaves had been marched across Africa and were being taken to England to the slave farms. Daniel Mullooly, Nikhil Sen and David Timmins were all the salve masters. Chris, Dean, Glenn, Simon and Stuart played the parts of the slaves. In this particular scene I was to play a former slave narrating a flashback of an event in his life, this particular event was his capture and sentence into slavery, Chris was to play my character in the scene seven years previous. My character is called Jemal and Dean's character is called Jabbo. We chose to only identify and name two of the slaves because these were the main focus of the scene they were the two main characters of the piece and the focus was on the relationship and situations that had and were in. ...read more.

scene I tried to give it even more emotion but the resulting piece didn't turn out as good as the original improvisation. I knew that I had to end the improvisation and the fact that it came to a climax in the piece made it easier to finish on a really powerful piece of speech, all the hurt and anguish, resentment and hate came down to one last sentence, " the beat me again and again and again, it continued throughout my slave life, but I will always look back to this day and know that for all my struggles I was beaten because I couldn't keep up, I was the youngest and I couldn't cope, I couldn't keep up, I just couldn't keep up". I felt that I needed to emphasise the stupidity and injustice that happened to the slaves and so I highlighted the key point in the previous performance (before my narration) how I was beaten for being too slow, I repeated the last phrase and slowed my speech right down and kept the tone soft so as to really make the audience listen and concentrate on what I was saying. As a group we all discussed after wards the scene we had performed and we agreed that we all began to really feel the emotion of the slaves and felt that we had captured the feelings and expressions of what slaves would have been like, myself and Dean agreed that if this was how we felt knowing that we were acting then the audience who are ...read more.

feel lonely and that this was the only world they knew it still showed how they were strong enough to take it in and start all over again day in day out. As he sings the rest of the group exit the stage from the same way they entered, this way the focus was totally on Glenn and could listen to the emotional words he sang and the performance he gave and begin to contemplate on it. I feel that the Development tasks helped me as an actor to appreciate and highlight my strengths and weaknesses within the pieces. I found that I produced some of my best work improvising a piece of text from within my own heart and using my own emotions to show the hurt of others. As well as this there are all the added other physical benefits I took from this work such as being able to show effectively facial expressions of hurt and anguish, being able to use repetitiveness effectively in the chants and in my narration piece, being able to use my body e.g. hands and presence in order to show command and dominance. It also showed me how there are many different ways to portray drama to the audience, in our development tasks we used, chants, still image, symbolism, narration, and song in order to create the desired effects of hope, hurt, sorrow and isolation and show our audience a realistic and true portrayal of what happened in the slave trade era and I feel that we achieved this in our pieces. ...read more.