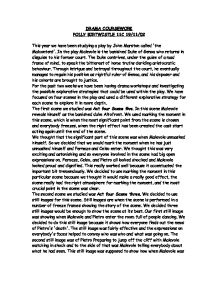 DRAMA COURSEWORK POLLY BIRTWISTLE 11C 19/11/02 This year we have been studying a play by John Marston called 'the Malcontent'. In the play Malevole is the banished Duke of Genoa who returns in disguise to his former court. The Duke contrives, under the guise of a mad frame of mind, to speak the bitterest of home truths deriding aristocratic behaviour. Through intrigue and betrayal throughout the court, he eventually manages to regain his position as rightful ruler of Genoa, and his deposer and his cohorts are brought to justice. For the past two weeks we have been having drama workshops and investigating the possible explorative strategies that could be used within the play. We have focused on four scenes in the play and used a different explorative strategy for each scene to explore it in more depth. The first scene we studied was Act four Scene five. In this scene Malevole reveals himself as the banished duke Altofront. We used marking the moment in this scene, which is when the most significant point from the scene is chosen and everybody freezes, when the right effect has been created the cast start acting again until the end of the scene. ...read more.

Our first still image was showing when Malevole and Pietro enter the room full of people dancing. We decided to do this still image because it shows how everyone finds out the news of Pietro's 'death'. The still image was fairly effective and the expressions on everybody's faces helped to convey who was who and what was going on. The second still image was of Pietro Preparing to jump off the cliff with Malevole watching in shock and to the side of that was Malevole telling everybody about what he had seen. This still image was supposed to show how when Malevole was telling everyone about the incident he was also having a flash back of what he saw. This was extremely effective as is showed the audience exactly what Malevole had seen. The reactions of the characters were clearly shown by the expressions on their faces and the shape of their bodies. The image was powerful and worked well. The third still image shows the after effects of the 'death' of Pietro. ...read more.

We each gave our thoughts like putting more expression into her speech and openly showing her emotions. She would be rather angry and insulted at this point so these emotions had to come across to the audience, which they weren't before we helped. We then decided that someone else should try the part. I think forum theatre is an extremely good way of getting everybody used to every part. It also helps people to feel more confident and in the long run improves everyone's acting skills. The fourth scene we explored was Act four Scene one. We decided to use hot seating for this act. We decided to act out a group therapy session to make the hot seating more interesting and we all slipped into our roles fairly well. However, some of the characters started to take up traits that weren't in their usual character. For example, Emilia became very outgoing and her and Bianca started a slanging match with Maquerelle so we had to stop and say that a character was acting oddly and that she should be more like her normal character. We all did this fairly well except for a few slip-ups but they were easy to fix. I think all in all it went well. ...read more.