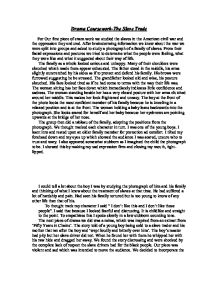 Drama Coursework-The Slave Trade For Our first piece of exam work we studied the slaves in the American civil war and the oppression they endured. After brainstorming information we knew about the war we were split into groups and asked to study a photograph of a family of slaves. From their facial expressions and postures we tried to determine what the people were feeling, what they were like and what it suggested about their way of life. The family as a whole looked serious and unhappy. Many of their shoulders were slouched which made them appear exhausted. The father stood in the middle, his arms slightly outstretched by his sides as if to protect and defend his family. His brows were furrowed suggesting he be stressed. The grandfather looked old and wise, his posture slouched. His face looked tired as if he had come to terms with the way their life was. The woman sitting has her face down which immediately indicates little confidence and sadness. The woman standing beside her has a very closed posture with her arms clutched around her middle. ...read more.

The story told of a young boy being sold to a slave trader and his mother that ran after the boy and 'wept loudly and bitterly over him'. The boy's master had pity but her slave driver did not. When he found her with them he whipped her with his raw hide and dragged her away. We found the story distressing and were shocked by the complete lack of respect the slave drivers had for the black people. Our piece was violent and sad which was intended to move the audience. We decided to incorporate the vastly contrasting places of status into our mime. The slaves who had the lower status were collapsed on the floor beneath their masters. The mother had thrown herself over her son and clung to him desperately, as if her body could protect him. Her facial expression was of distress and anguish which was shown by the wrinkling of her forehead, slanting the eyebrows down and the quick movements of her eyes conveying she was agitated. I played the young boy. ...read more.

This would also enable us to more clearly focus the audience's attentions on to certain characters at different points during the mime. The piece could have also been improved by working out our positioning better so that the audience could always see our faces when intended to. I was aware during the performance that my back was towards the audience and I had to subtly adjust my position. A group I thought worked particularly well was Olly's. The somber procession of the slaves and the master made the audience feel low. Olly hung his head show shame, sorrow and little confidence. David I played the kinder slave master. To show his sympathy he had an unsure facial expression and folded his arms to show discomfort. Nick was very successful at making the harsh slave master scary and intimidating because he walked with such a sense of power. The work we have done on slavery has helped me understand many of the different emotions they must have been though. The conditions and atrocities they suffered were unbelievable and it made me feel angry to think we could treat other humans in such a wicked way. ...read more.