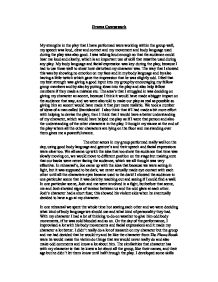 Drama Coursework My strengths in the play that I have performed were working within the group well, my speech was loud, clear and correct and my movement and body language used during the play was also good. I was talking loud enough so that the audience could hear me loud and clearly, which is an important use of skill that must be used during any play. My body language and facial expression was key during the play, because I had to use these well to show how disturbed my character was. The way that I showed this was by showing no emotion on my face and in my body language and by also having a little twitch which gave the impression that he was slightly odd. I feel that my best strength was giving a good input into my group by encouraging my fellow group members and by also by putting ideas into the play and also help fellow members if they made a mistake etc. The area's that I struggled in was deciding on giving my character an accent, because I think it would have made a bigger impact on the audience that way, and we were also told to make our play as real as possible so giving him an accent would have made it that just more realistic. ...read more.

On the day of the performance, I improvised a lot with his body movements and facial expressions and it made my character a lot better. I didn't really do a lot of research on my character but the group and me had decided that he would try and be like the character from The Phone Booth were he would make the victim do things that we would never really do and also make odd comments and know a lot about him. The similarities that character has with my character is that he knew a lot about all the group, like their names, and their age but he didn't let them know until half through the play. I developed some skills during rehearsals like hot seating. It helps a lot because you feel more like the character you are playing and when you are hot seating another member of the group you know their character better too. If you know your character better, you act much better which I found out and the audience also believed I was Richard Winters and not me! I did make a few changes to my character, like giving him a twitch, which I didn't set out to do in the first place, and I also made a change in what costume I was going to wear. ...read more.

Costume was probably our best feature because we were all wearing something different to each other, or gave an idea to our jobs etc. You could tell that I was the odd one of the group because my clothes we abnormal compared to the rest of the other characters, and Joe who was a businessman so he wore a shirt and tie which matched his character to a tee. Lighting was only a small factor in our play where at the beginning of the play it was complete darkness for at least a minute and a half to give the audience an idea on our dark it was supposed to be and then we acted as if it was dark, but in light which we found hard but we managed it. We used our stage well and we made sure that we used proxemmics too. The pace of our play was slow from the beginning, so we clearly had to fasten the pace up, by doing this, it would make the audience a lot more interested in the play. We did this by adding a fight scene into our play so that upped the pace a lot because there was a lot of movement on the stage and we also had to make sure that our timing was good to just in case we hurt someone during that scene. We moved around the acting space we had quite well, like each character changed position to show that time was moving on. ...read more.