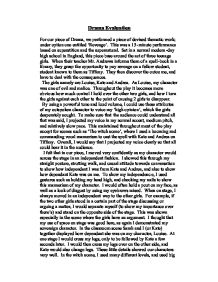 Drama Evaluation For our piece of Drama, we performed a piece of devised thematic work; under option one entitled 'Revenge'. This was a 15-minute performance based on superstition and the supernatural. Set in a normal modern-day high school in England, this piece base around the act of three teenage girls. When their teacher Mr. Andrews informs them of a spell-book in a library, they grasp the opportunity to pay revenge on a fellow student, student known to them as Tiffany. They then discover the outcome, and have to deal with the consequences. The girls namely are Louise, Kate and Andrea. As Louise, my character was one of evil and malice. Throughout the play it becomes more obvious how much control I hold over the other two girls, and how I turn the girls against each other to the point of causing 2 girls to disappear. By using a powerful tone and loud volume, I could use these attributes of my outspoken character to voice my 'high opinion', which the girls desperately sought. ...read more.

In the classroom scene Sarah and I (or Kate) together displayed how dependant she was on my character, Louise. At one stage I would cross my legs, only to be followed by Kate a few seconds later. I would then cross my legs over on the other side, and Kate would also change legs. These little details showed our characters very well. In the witch scene, I used many different levels, and used big movements to show hat I was casting a spell. Overall, I think that my large, confident movements in this scene as well as my distinct facial expressions displayed my character's true evil spirit, and how deadly serious she was taking it. The mood and atmosphere in the piece were created in a number of different ways. The lighting was a huge help here, and through this, we could adapt our characters more easily to suit the scene. In the witch scene, by speaking in a low but harsh tone, the mood was created because the audience could tell by the definition that the scene was enchanting and evil. ...read more.

But, because we rehearsed it so well, in the performance the slap worked flawlessly. As was said before, I think that my most successful elements of our piece were the witch scene as a group. However, I think that my personal best scene was the betrayal scene where I say my 'pointy reckoning speech'. I think that of all the scenes, I show my character's true colors in this. I found this one of the most satisfying also, because the amount of anger and tension, which had to be built up, was enormous. However, although I thought that our piece was good, there are many improvements that could be made. I think that although I felt the witch scene was our best, it could be made even better with more rehearsals. By rehearsing this scene more in front of people we would have been more comfortable acting it out on the performance day. I think that before our performance (especially for the witch scene) in future we should warm up our bodies so that we can move more relaxed around the stage. ...read more.