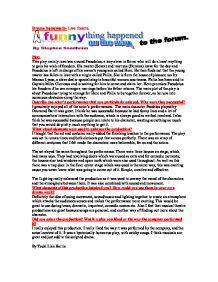 Drama homework- Live theatre: A funny thing happened on the way to the forum By Stephen Sondheim

Drama homework- Live theatre. Plot: This play mainly revolves around Pseudolus, a lazy slave in Rome who will do almost anything to gain his wish of freedom. His master (Senex) and mistress (Domina) leave for the day and Pseudolus is left in charge of his owner's young son called Hero. He then finds out that the young master has fallen in love with a virgin called Philia. She is from the house of pleasure run by Marcus Lycus, a slave dealer specializing in beautiful women courtesans. Philia has been sold to Captain Miles Gloriosus and is waiting for him to come and claim her. Hero promises Pseudolus his freedom if he can arrange a marriage before his father returns. ...read more.

I also think he was successful because people can relate to his character, wanting something so much that you would do pretty much anything to get it. What visual elements were used to enhance the production? I thought that the set and costume really added the finishing touches to the performance. The play was set in roman times and both elements put that across perfectly. There was an array of different costumes that I felt made the characters more believable, for us and the actors. The set stayed the same throughout the performance. There were three houses on stage, which had many uses. They had revolving doors which were used as exits and for comedic moments; the houses also had windows and open roofs which were also used throughout. ...read more.

What elements of this production inspired you? How could you use them in your own drama work? Definitely the idea of using movement, sound/music and lighting together to create an atmosphere which attacks the audiences senses and makes the performance more exciting. This would be great to use during tense, dramatic, important, comedic scenes etc. Also I feel that musical theatre productions are great because songs are personal, and another way of finding out more about the character. Did you enjoy the production? Was it a play you liked or the way the company performed it? I really enjoyed this production. I really liked the way it was performed by the company, and the actual content of it. It was a hysterically humorous play, with catchy songs. I think musicals are great and just add to the scripted drama. By Tsuki Lian Harris ...read more.