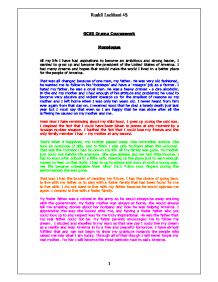 GCSE Drama Coursework Monologue All my life I have had aspirations to become an ambitious and strong leader, I wanted to grow up and become the president of the United States of America. I had many dreams and hopes that would make the world I lived in a better place for the people of America. That was all changed because of one man, my father. He was very old fashioned, he wanted me to follow in his 'footsteps' and have a 'meagre' job as a farmer. I hated my father, he was a cruel man. He was a heavy drinker - a dire alcoholic. In the end my mother and I had enough of his attitude and problems; he used to become very abusive and violent towards us for the smallest of reasons so my mother and I left home when I was only ten years old. I never heard from him ever again from that day on. I received word that he died a lonely death just last year but I must say that even so I am happy that he was alone after all the suffering he caused on my mother and me. Even Now I hate reminiscing about my child hood, I grew up during the cold war, I despised the fact that I could have been blown to pieces at any moment by a Russian nuclear weapon. I loathed the fact that I could lose my friends and the only family member I had - my mother at any second. That's when it happened, my mother passed away. ...read more.

With a bereaved expression, this paragraph is to be acted out while seated. Having my head in my hands would highlight the emotion with me taking my head out of my hands after each sentence and looking up at the audience. Now, for this section I would stand up for this paragraph. Positioned center stage, with smooth arm gestures moving outwards after every sentence. For the final section of this monologue, I would again come towards the audience in a straight line. Slowly getting closer with each word and using arm gestures such as clenching my fists throughout the paragraph with tense but sustained movements. Positioned upstage at the center where I would become noticeable to the audience. Then to end I would finish with a freeze with my hand placed over my heart, with a still and strong finish sustained. Use of Voice The prologue to the monologue should be started in a very proud and optimistic tone, with particular expression put on the adjectives such as 'ambitious' and 'strong'. The opening should be at a medium pace but at the same time calm and smooth whilst expressing a joyful opening. Now with the second section bathos - a change in tone should occur. With the emotional content in this part, the tone should change to sad. I would change my voice so it is in a hurried fashion. While sadness is shown at particular points when concentrating on the words 'footsteps' and 'meagre' sarcasm should be shown. ...read more.

I could make the audience involved by particular messages and use of body language. The audience should feel my emotion and feel they have lost something when they hear my tragic story of losing my mother. I want to portray a grieving relative / family member, but show the variation with the slight sarcasm with the 'click' section. This has a deeper meaning - the audience may realise certain sarcasm. The burden upon me of choice should reflect the previous paragraph; I want to communicate the idea that still life for me is all hardship. The final paragraph should show the audience that there is a light at the end of the tunnel. It shows the variation to them that can be seen throughout the piece. It should make them see that life is a virtue and that not everything is bad. Inspirational things can happen to anyone. The contrast is my method of acting out and showing to the audience a broader variety of emotions, language and movements. Belief and patriotism is another point I am trying to convey through the use of my language - this is shown when talking about my foster father and my dreams to turn America in to a peaceful country. The last line and sustained freeze would make a bold point by giving the piece a climactic finish and endeavour the audience to really see the provocative emotions used; in turn causing the audiences provoked reactions and mixed feelings to the piece. The object of my monologue was to convey many messages about voice, movement and dramatic performance in drama. ?? ?? ?? ?? Rushil Lachhani 4S 1 ...read more.