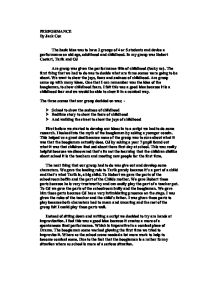 PERFORMANCE By Jack Cox The basic idea was to have 3 groups of 4 or 5 students and devise a performance on old age, adulthood and childhood. In my group was Robert Costart, Tarik and OJ Are group was given the performance title of childhood (lucky us). The first thing that we had to do was to decide what are three scenes were going to be about. We want to show the joys, fears and sadness of childhood. Are group came up with many ideas. One that I can remember was the idea of the boogieman, to show childhood fears. I felt this was a good idea because it is a childhood fear and we would be able to show it in a comical way. The three scenes that our group decided on was; - > School to show the sadness of childhood > Bedtime story to show the fears of childhood > And walking the street to show the joys of childhood First before we started to develop our ideas in to a script we had to do some research. ...read more.

We gave him these parts because OJ has a very intimidating presence on the stage. I was given the roles of the teacher and the child's father. I was given these parts to play because both characters had to mean and uncaring and the rest of the group felt I could play these parts well. Instead of sitting down and writing a script we decided to try are hands at improvisation. I feel this was a good idea because it creates a more of a spontaneous final performance. Which is imperative in a comical piece of Drama. The boogieman scene worked glowing the first time we tried to improvise it. Where as the school scene needed a lot more work to help to become comical scene. Due to the fact that the boogieman is a rather funny situation where as school is more of a serious situation. During the first few weeks we found it rather hard to rehearse because of the lack of energy within the group. ...read more.

The audience knew that the boogieman was behind the child but the child and the child's father didn't. I feel this worked extremely well because it created suspense among the audience. Its purpose was to get the audience wondering when the characters would notice the monster and therefore kept them watching to find out. Unfortunately are group did not have time to have a dress rehearsal due to even more absents within the group. Are final performance went really well as far as I am concerned. I feel if we had more time we could have improved are timing in many scenes. For example in the classroom. Scene the teacher had to leave the class and return when the children had finished. I felt are timing was completely off in that scene and I (the teacher) returned to early and spoiled most of the scene. I don't think the audience noticed though. Although the performance went well for all 3 groups I don't feel Mr Bell choose the right audience. The audience was many years younger than the actor and I don't think they appreciated all the jokes, due to the fact they didn't understand them. ...read more.