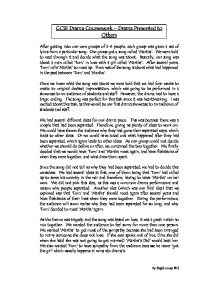 Drama Presented to Others.

GCSE Drama Coursework - Drama Presented to Others After getting into our own groups of 5-6 people, each group was given a set of lyrics from a particular song. Our group got a song called 'Martha'. We were told to read through it and decide what the song was about. Basically, our song was about a man called 'Tom' in love with a girl called 'Martha'. After several years, 'Tom' calls 'Martha' to meet up. Then rest of the song is about what had happened in the past between 'Tom' and 'Martha'. Once we knew what the song was about we were told that we had four weeks to create an original devised improvisation, which was going to be performed in a showcase to an audience of students and staff. However, the drama had to have a tragic ending. The song was perfect for this task since it was heartbreaking. I was excited about this task, as this would be our first drama showcase to an audience of students and staff. We had several different ideas for our drama piece. This was because there was a couple that had been separated. ...read more.

Her dad beats her in this scene because she answered back to him. It would have been awkward if the freeze-frames did not have any music with it. Therefore, we play a very slow and moving song to help bring out the pain and suffering of 'Martha'. There were four freeze-frames. First one was 'Martha' sitting down on a chair and her dad coming in behind her. 'Martha' had her back towards her dad and therefore, could not see he was there. Freeze-Frame two is when 'Martha's Dad' has 'Martha' by the scruff of her neck. This is her dad taking revenge out on his daughter for answering back to him earlier especially in front a guest. Freeze-Frame three, 'Martha ' is on the floor. She shows no resistance, as she is scared of her dad, as she does not know what he would do to her. The fourth and final freeze-frame is 'Martha' on the floor with her head in her hands and her dad walking away from her without a care in the world. Another technique we used was flashbacks. We used flashbacks all throughout our drama as we were trying to show the audience, what had happened between 'Martha' and 'Tom'. ...read more.

Also, if you act in front of people you know, it is not as realistic as it would be in a theatre. In a theatre production you do not know the audience, and therefore, gives you a whole new experience. I was extremely nervous before performing our drama, as there were so many people in the drama studio. Also, we were the last group to perform, so we had to wait for everyone to perform their show, until we could do ours. Once I was on the stage, I did not feel nervous at all. I just hate the anticipation, I hate waiting, to go on stage because you start to think about things you have forgotten. You start to ask yourself, do you know what you are doing? Are you sure you go on stage from the left, or was it the right? Then you start to panic and realise how big the crowd actually is. Nothing major went wrong in our play, everyone remember their lines, when they had to come on, and from which side. But as expected, of course just little things went wrong. Little things like, forgetting a prop or not moving a chair. In our play we did not use many props so there was not much to get confused about. By Steph Jones 11Q ...read more.