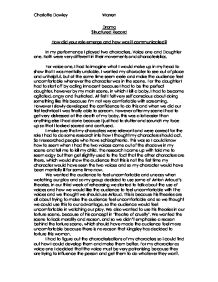 Drama Q1 on peice of drama

Drama Structured Record How did your role emerge and how was it communicated? In my performance I played two characters, Voice one and Daughter one. Both were very different in their movements and characteristics. For voice one, I had to imagine what I would make up in my head to show that I was mentally unstable. I wanted my character to see out of place and unhelpful, but at the same time seem eerie and make the audience feel uncomfortable whenever the character was in the scene. For the daughter I had to start off by acting innocent because I had to be the perfect daughter, however by my main scene, in which I kill a baby, I had to become agitated, angry and frustrated. At first I felt very self conscious about doing something like this because I'm not very comfortable with screaming. However I slowly developed the confidence to do this and when we did our first technical I was finally able to scream. However after my scene I had to get very distressed at the death of my baby, this was a lot easier than anything else I had done because I just had to stutter and scrunch my face up so that I looked scared and confused. ...read more.

I had to figure out the characterisations of my characters so i could find out how I could develop them and make them better. For my character as voice one I decided that the voice must be very patronising because they are trying to influence the person and get them to do whatever they want. They must also have a violent personality and be filled with hatred, this is to show how they really feel towards the character. A white mask to show they have no face and are so imaginary. However there is no background for the voice because it is a figment of the characters imagination. However the daughter's characterisation was a bit more complicated. She is a common girl and so taboo is used such as 'you fucking thing'. This shows she is not from a posh family. Her background is that she was with her boyfriend for two weeks before she slept with him and she thought she was in love. However she then fell pregnant and the boyfriend didn't want to be a father and so he left. ...read more.

However when we finally got to my character I was very conscious of the fact that I had to scream. In our rehearsals I only ever said my words and I never actually screamed them. Most of my scene was walking around until the voices came out. However when it came to our first technical I had to scream, however the teachers told me I needed to look more natural when I screamed because I still looked very conscious. So I had to work on looking natural which was hard because I still felt uncomfortable with screaming. On our first performance I felt that my scene went well, however I was speaking really quickly and so I needed to calm my nerves. On the day of our final performance, my teacher told me that I should walk in carrying the baby instead of having it in the cot at the beginning of the scene, and this may help he with my confidence. So I walked out with the baby in my arms and I found that it was much easy to scream afterwards because I had to build up my anger instead of just letting it out. This helped my performance enormously. ?? ?? ?? ?? Charlotte Dowley Warren ...read more.