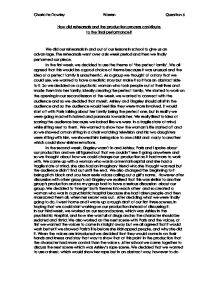 How did rehearsals and the production process contribute to the final performance? We did our rehearsals in and out of our lessons in school to give us an advantage. The rehearsals went over a six week period and then we finally performed our piece. In the first week, we decided to use the theme of 'the perfect family'. We all agreed that this would be a good choice of theme because it was unusual and the idea of a perfect family is unauthentic. As a group we thought of a story that we could use, we wanted to have a realistic story but make it so it has an abstract side to it. So we decided on a psychotic woman who took people out of their lives and made them into her family, ideally creating the perfect family. We started to work on the opening in our second lesson of the week, we wanted to connect with the audience and so we decided that myself, Ashley and Kingsley should all sit in the audience and so the audience would feel like they were more involved. ...read more.

needed to use a movement scene, and after around an hour of trying we couldn't think of one and so we left it for then. In our forth week, we worked on our forth scene with the psychiatric hospital and Paris with the voices once again. We wanted to make it more authentic and so we made the voices more cynical and violent towards Paris to show the change in power and relationship. Paris then wrote a rough script for my scene, where I am screaming at a child who will not stop crying, the voice are once again introduced and I am pushed to breaking point where I finally kill my child. We also changed the voices appearance, we wanted them to wear masks and so seem more jumpy and creepy by leering at Paris rather than crawling round on their hands and knees because that's more connected to animals/pets that to control. We then started to work on Kingsley's scene where he is writing about his dead friend and his wife, feels as though he has given into his thoughts of revenge for his death. ...read more.

In the sixth week, we worked on our movement scene so we could make it fit with the music and so that it worked better and flowed. We also worked on our ending because we had changed the music and so we had to make the scene slightly longer to fit into the music perfectly. After school on two of the days we worked on the characterisation for the voices, because we and the teachers felt that the voices weren't distorted enough and that they needed to look more out of place that any of the other characters. We also worked on Paris's opening scene and we made it so that myself and Ashley made the static noise which suggested that we were showing her past, we thought that this added sense to the scene and also we didn't need to find the sound on a computer etc. When our performance came we were very happy with it because, through all the tantrums and storming out of rehearsals, we had finally come up with an abstract piece of work. ?? ?? ?? ?? Charlotte Dowley Warren Question 6 ...read more.