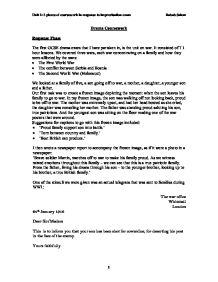 Drama - Response Phase to the unit on war.

Drama Coursework Response Phase The first GCSE drama exam that I have partaken in, is the unit on war. It consisted of 7 1 hour lessons. We covered three wars, each war concentrating on a family and how they were affected by the wars: * The First World War * The conflict between Serbia and Bosnia * The Second World War (Holocaust) We looked at a family of five, a son going off to war, a mother, a daughter, a younger son and a father. Our first task was to create a frozen image depicting the moment when the son leaves his family to go to war. In my frozen image, the son was walking off not looking back, proud to be off to war. The mother was extremely upset, and had her head bowed as she cried, the daughter was consoling her mother. The father was standing proud saluting his son, true patriotism. And the youngest son was sitting on the floor reading one of the war posters that were around. Suggestions for captions to go with this frozen image included: * 'Proud family support son into battle.' * 'Torn between country and family.' * 'Best British can produce.' I then wrote a newspaper report to accompany the frozen image, as if it were a photo in a newspaper: 'Brave soldier Martin, marches off to war to make his family proud. As we witness mixed emotions throughout this family - we can see that this is a true patriotic family. From the father, living his dream through his son - to the younger brother, looking up to his brother, a true British family.' One of the stimuli we were given was an actual telegram that was sent to families during WW1: The war office Whitehall London 24th January 1916 Dear Sir/Madam This is to inform you that your son has been shot for cowardice, for deserting his post in the face of the enemy. ...read more.

I would die for Bosko, but if all these problems are posing us, could it mean that this love isn't as strong as I thought it was?... I've had many nightmares about no mans land...but what if they aren't just dreams, is there a hidden message? Admira starts off optimistic, but then her mood slowly becomes more pessimistic as the diary entry goes on. She then starts to think whether the situation is too good to be true, she wonders why there is a war going on if they would truly let them live in peace over there. She thinks deeper, not just about the problems that are on the surface. She mentions god several times in her diary entry, this shows that she is a religious girl. But her faith in god is wearing away. We can tell that she is having second thoughts about the whole situation, but tries to put this aside for Bosko. She talks about nightmares, and how she thinks that there is a hidden message, again referring to her religious background - Allah might be telling her that this is not such a good idea through her dreams. I will talk about the ending of her diary entry later. Here is a excerpt from a diary entry that I imagined Bosko could've written the night before: Tonight, tonight is the night I decide what to take with me, to start my life anew with my love...I am positive that this is the right choice. Why must love be such a hardship these days, what are we doing that is so wrong?... I put on a brave face, whenever she comes to me with her worries - I try to be the strong one,. To protect her. But everything she says does make sense, she has a point, our happiness is not guaranteed. She seems to be losing faith in her god, and I really don't want to be the reason behind that...I would die before I let harm find her. ...read more.

Another idea was triggered by: "Doctor Doctor Are you unkind." This gave us the idea of the human testing - the torture. Another idea, which was the best one we had: "Here is a dancer here is a teacher here is a runner..." "here is potential gone for good." This gave us the idea of killing the people, the potential. The mime was a good idea because it emphasized the soundtrack, and made it more effective...and non-naturalistic. We chose to do a non-naturalistic play because it meant that the actions and body language could be exaggerated to get the point across. We could also show many different scenes involving many characters even though there were only six actors in total. A mime is much more effective in portraying a dream like performance. We could've developed our play further by having more time to practise, which would allow us to run through the play and see what additions need to be made. We didn't get a chance to run through our play, despite that I thought that it went very well. I believed that we had created a genuinely good pierce of drama work, and my thoughts were confirmed when we received very positive feedback from the audience and teacher. Another group used a very interesting drama technique in their play. A person was telling a story to a group of people and as she was retelling the story the people got up and started acting it out, a visual memory. It was extremely effective and original. It created an unreal atmosphere and was a powerful piece of drama. It was done in a flowing manner so the audience was not confused, and managed to comprehend that this was a visual memory...a very hard thing to do, but they successfully managed it. In conclusion I believe this has been a very successful exam, I have benefited a lot from it, for my drama lessons in the future as well as my life. Unit 1: 3 pieces of coursework in response to improvisation exam Rabab Salem 1 ...read more.