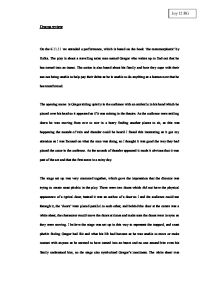 Drama review. On the 6.11.11 we attended a performance, which is based on the book the metamorphosis by Kafka.

On the 6.11.11 we attended a performance, which is based on the book ‘the metamorphosis’ by Kafka. The play is about a travelling sales man named Gregor who wakes up to find out that he has turned into an insect. The action is also based about his family and how they cope with their son not being unable to help pay their debts as he is unable to do anything as a human now that he has transformed.

The opening scene  is Gregor sitting quietly in the audience with an umbrella in his hand which he placed over his head so it appeared as if it was raining in the theatre. As the audience were settling down he was moving from row to row in a hurry finding another places to sit, as this was happening the sounds of rain and thunder could be heard. I found this interesting as it got my attention as I was focused on what the man was doing, so I thought it was good the way they had placed the actor in the audience. As the sounds of thunder appeared it made it obvious that it was part of the act and that the first scene is a rainy day.

The stage set up was very crammed together, which gave the impression that the director was trying to create crust phobia in the play. There were two doors which did not have the physical appearance of a typical door, instead it was an outline of a door so I and the audience could see through it, the ‘doors’ were placed parallel to each other, and behind the door at the centre was a white sheet, the characters would move the doors at times and make sure the doors were in sync as they were moving. I believe the stage was set up in this way to represent the trapped, and crust phobic feeling Gregor had felt and what his life had become as he was unable to move or make contact with anyone as he seemed to have turned into an insect and no one around him even his family understood him, so the stage also symbolised Gregor’s loneliness. The white sheet was Gregor’s bed which was shown in birds eye view, which I found the technique the director used to make the sheet appear like a bed in birds eye view very clever, as the actor just stood up behind the sheet as he was asleep and as the doors were see through and as the audience seats were slyly high up it was able to give off the illusion that the scene was in birds eye view, which made me feel like I and the audience were invading Gregor’s space as it felt I and the audience were spying on the character. This made me feel like I was part of the play, so I think the way  in which the set design had been designed and the techniques used for the set was good as it created a lot of feelings and kept me interested in the play.

The director used masks to represent the ‘Samsa family’ however Gregor did not wear a mask, only Greta which is his sister, and his parents Mr and Mrs Samsa. The masks seemed to be used as a distancing device, as it demonstrated 2 dimensional characters to the audience. The use of the masks allowed me to examine the characters from a crucial perspective. The personalities of the characters were represented through the colour and design of the masks, for instance Mr Sama’s hot headed temper is symbolised through the red cheeks and deep red grove of his eyes. I believed this allowed the audience to identify the characters easier as there personality is literally marked on their faces. The mask was a good way of telling the story, as the whole story seems to be a metaphor, so the masks seems to fit within the theme.

In the play there was no specific song which was played, however there were  a repetition of the sound of a clock ‘tick tok,’  this was played  in between scenes, I believe the director done this to show how time flies and how the family grow increasingly frustrated with Gregor as they cannot cope with him. Also the characters produce the sounds with there mouths, for instance there was a scene where Mr and Mrs Samsa drag Gregor’s  writing desk from  his room, and the two actors created a shrill screaming sound with their voices, like when a nail is scratching against a chalk board. This was a creative method the actors used, and I was interested when they done so, as it kept me into the play.

Overall I enjoyed the play, I believe that it  was a very unique piece which they took from the book and were able to bring it to life yet bring an unrealistic vibe to the play which I found very interesting, which kept me engaged in the play throughout.