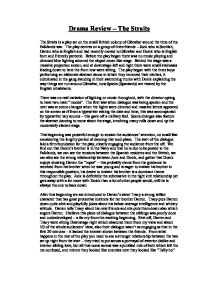 Drama Review - The Straits The Straits is a play set on the small British colony of Gibraltar around the time of the Falklands war. The play centres on a group of three friends - Jock who is Scottish, Darren who is English and had recently moved to Gibraltar and Doink who is English born and Fiercely patriotic. Before the play began there was no music playing and dimmed blue lighting adorned the sloped cross-like stage. Behind the stage was a massive projection screen, and at downstage-left and right there were small staircases leading down to here the front row were sitting. The play began with the three boys performing an elaborate abstract dance in which they removed their clothes, it culminated in the gang standing in their swimming trunks with Doink explaining the way things are run around Gibraltar, how Spicks (Spaniards) are treated by the English inhabitants. There was no real variation of lighting or music throughout, with the director opting to have two main "modes". The first was when dialogue was being spoken and the next was at scene changes when the lights were dimmed and massive letters appeared on the screen as if from a typewriter stating the date and time, this was accompanied by typewriter key sounds - this gave off a military feel. Scene changes also feature the abstract dancing to move about the stage, involving many rolls down and up the moderately slanted stage. ...read more.

He didn't falter once on the path to the eventual crescendo of fury, holding the silence in a theatre full of rebellious teenagers. The tension and mounting worry for Darren was scintillating and exciting, the worried glances thrown at Doink by submissive Jock when he wasn't looking were great and made the piece. Jock trying to calm Doink down by saying that Darren may have been kept in by his mum only added fuel to the flame. This was one of the memorable moments of an outstanding play. After 'Anti-English day' we see Doink revelling in the carnage that occurred; rapturously accounting the stabbing of a Spanish boy. We can see that Jock is very shaken by the events but is trying to keep a brave face on and share Doink's excitement. This part of the play was very good - it showed that Doink only thought he could achieve the reverence of his brother through violence, it sort of acted as homage to his absent older brother. The scene ends with Tracey coming on looking for Doink, she tells him that the Argentineans have sunk the boat his brother was serving on. When the scene begins we can see that Doink is ecstatic he has held up the tradition of fighting back. Once Doink has stopped recounting the events he turns to Jock and taunts him for going at it half heartedly and for empathising with the Spanish boys who he plays Football with. ...read more.

This scene shows the barriers Doink has put up around him to hide the anguish he feels. It also shows the longing of acceptance on Darren's part, the way he wants to be part of something. The latter comment will dictate the end of the play. The Last scene is where Jock and Doink are suiting up to go Octopus hunting when Darren appears on the scene and begs forgiveness from Doink. Doink is starting to get angry again when Darren picks up a harpoon gun and says he'll prove he's man enough to be Doink's friend after some hesitation Darren shoots a Spanish youth hunting for Octopus in the boy's area. The scene ends with a loud gun shot and the song "God save the Queen" by the Sex Pistols Being sung by a child. The last scene represented a lot. The lengths Darren took to be accepted by Doink, culminated in murder. The realisation by Doink that he has moulded Darren into what he believes is a weak being. Doink's constant pushing of Darren to become more like him. Jocks frustrated character who sees wrong in his friends actions. The death of Doink's "invincible" brother brought doubts into Doink's mind of everything he had ever believed in. This play has many prominent themes which are all subtly integrated into this wonderfully crafted work. I really enjoyed this play which appeals to all. It is a must-see. ...read more.