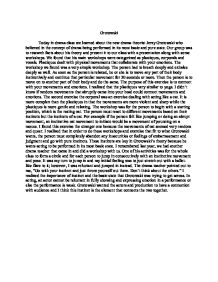 Grotowski Today in drama class we learned about the new drama theorist Jerzy Grotowski who believed in the concept of drama being performed in its most basic and pure state. Our group was to research facts about his theory and present it to our class with a presentation along with some workshops. We found that his main workshops were categorized as plastiques, corporals and vocals. Plastiques dealt with physical movements that collaborate with your emotions. The workshop we found was a very simple workshop. The person had to breath deeply and exhales deeply as well. As soon as the person is relaxed, he or she is to move any part of their body instinctively and continue that particular movement for 30 seconds or more. ...read more.

The second exercise the corporal was an exercise dealing with acting like a cat. It is more complex than the plastiques in that the movements are more violent and sharp while the plastiques is more gentle and relaxing. The workshop was for the person to begin with a starting position, which is the resting cat. The person must react to different movements based on their instincts but the instincts of a cat. For example if the person felt like jumping or doing an abrupt movement, an instinctive cat movement to initiate would be a movement of pouncing on a mouse. ...read more.

It was my turn to jump in and my initial feeling was to just stretch out with a ballet-like flare to it; however, I was reluctant and jumped in instead. The drama teacher pointed out to me, "Go with your instinct and just throw yourself out there. Don't think about the others." I realized the importance of instinct and the basic state that Grotowski was trying to get across. In acting, an actor cannot be reluctant in fully showing and expressing emotion in a performance or else the performance is weak. Grotowski wanted the actors and production to have a connection with audience and I think this instinct is the element that connects the two together. ...read more.