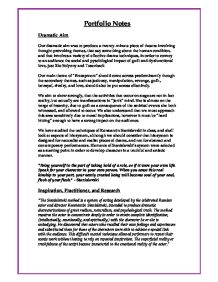 Portfolio Notes Dramatic Aim Our dramatic aim was to produce a twenty-minute piece of theatre involving thought provoking themes, that say something about the human condition, and that involves a variety of effective drama techniques, in order to convey to an audience the social and pysclological impact of guilt and dysfunctional love, just like Solyony and Tusenback Our main theme of "Entrapment" should come across predominantly though the secondary themes, such as jealousy, manipulation, revenge, guilt, betrayal, rivalry, and love, should also be put across effectively. We aim to show strongly, that the activities that occur on stage are not in fact reality, but actually are manifestations in "Jen's" mind. She is almost on the verge of insanity, due to guilt as a consequence of the satirical events she both witnessed, and allowed to occur. We also understand that we must approach this area sensitively due to moral implications, however it must be "hard hitting" enough to have a strong impact on the audience. We have studied the techniques of Konstantin Stanislavski in class, and shall look at aspects of his system, although we should consider that his system is designed for naturalist and realist pieces of drama, and not for abstract and contemporary performances. Elements of Stanislavski's system were selected as a starting point in order to develop character in a truthful and artistic manner. "Bring yourself to the part of taking hold of a role, as if it were your own life. Speak for your character in your own person. When you sense this real kinship to your part, your newly created being will become soul of your soul, flesh of your flesh." - Stanislavski Inspiration, Practitioner, and Research "The Stanislavski method is a system of acting developed by the celebrated Russian actor and director Konstantin Stanislavski, intended to produce dramatic characterizations of great realism, naturalism, and psychological truth. The method requires the actor to concentrate deeply in order to attain complete identification, (intellectually, emotionally, and spiritually.) ...read more.

We then considered "How can we show this effectively?" After much deliberation, we decided to enclose Jen by surrounding her physically, and emotionally by moving towards her slowly and each saying a phrase. My phrase is "You betray me, you let me down." Then when Jen covers her ears, we stop abruptly. Next we choreographed a series of stomps and steps to move around her menacingly whilst she describes what happened and the guilt she feels. Then we halt and raise our arms in order to completely ensnare Jen, and when she looks at us, one at a time we lean down, to construct a vortex around her, which is symbolic as she just revealed that she was in the bathroom when the fire started, and it supposedly originated from the bathroom. Finally she shout's "STOP" and we fall to the ground, only to crawl up and freeze leaving Jen to address the audience with a monologue, whilst we are in darkness and move to starting positions for next scene. All the characters, except for Jen, move and synchronise as an ensemble. We all wear masks too, to both signify this and to show that we are the "demons" in her mind. The next scene shows the struggle of being trapped in the fire itself, and of the panic that ensued. We kneel, compacted into a very small rectangle of darkness, with our hands reaching and clasping in a beam of a red light set on strobe, so that it flashes. This light forms a rectangle of red light representing being outside of the fire. This part of the scene ends when "Becky" says "Craig's still in there!" leaving Craig reaching out from the fire. To make the transition easily to the next part of the scene, we build up an ensemble rhythm of clicking as we move steadily to our new positions. Then we each deliver a phrase or two that summarises how our character feels about what's happening, or what's actually happening. ...read more.

the sea has won. World war 2, Hillsborough, September 11th. So many people hurt, dead, and still suffering. And like them... I'm ...trapped!" Then the stage fades to black out. Much of this play has developed from mostly naturalistic scenes that grew from basic improvisations and it is only over the final weeks that the dramatic devices were brought in. The dialogue, for example, has already changed dramatically and no doubt right up until the performance itself, a few minor changes, or indeed drastic changes may occur in all aspects. Health and Safety There were many aspects of this performance that we've had to consider in order to make sure that nobody gets hurt, either in the cast, or the audience. Firstly, the fabric we used must be folded properly and placed somewhere extremely visible, or moved off stage because it's shiny and somebody could fall or trip over it, or the masks for that matter if they are left in inappropriate places. Another consideration was the fight scene, which had to be completely choreographed in order to prevent anyone getting hurt. We used out of distance fighting so that for example during a punch one person's face does not come anywhere near the fist itself, but because the movement is in slow motion, and rhythmic clapping is heard, it is made believable and yet stylised. Also the block that we bring on to be used as a gravestone must be lifted by as many people as possible to avoid anybody hurting their backs, or dropping it on their feet. Finally the lighting and special effects must be considered immensely because any loose wires on the floor must be taped down to prevent tripping. Finally we must put up signs warning of the strobe lighting and smoke machine, (if we decide to use it) so that the audience are prepared if they have epilepsy or bad asthma. Overall though we've tried to consider all aspects of possible danger and hope that there are no problems on the night. ...read more.