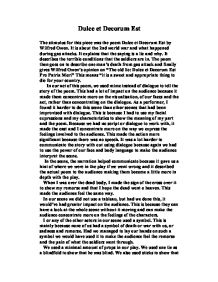 Dulce et Decorum Est The stimulus for this piece was the poem Dulce et Decorum Est by Wilfred Owen. It is about the 2nd world war and what happened during gas attacks. It explains that the saying is a lie and why. It describes the terrible conditions that the soldiers are in. The poem then goes on to describe one man's death from gas attack and finally gives Wilfred Owen's opinion on "The old lie: Dulce et Decorum Est Pro Patria Mori" This means "it is a sweet and appropriate thing to die for your country. In our act of this poem, we used mime instead of dialogue to tell the story of the poem. This had a lot of impact on the audience because it made them concentrate more on the visualisation, of our faces and the act, rather than concentrating on the dialogue. As a performer, I found it harder to do this scene than other scenes that had been improvised with dialogue. ...read more.

This is because they can have a look at the whole scene without it moving and can make the audience concentrate more on the feelings of the characters. I or any of the other actors in our scene used a symbol. This is mainly because none of us had a symbol of death or war with us, or sadness and remorse. Had we managed to lay our hands on such a symbol we would have used it to make the audience feel the remorse and the pain of what the soldiers went through. We used a minimal amount of props in our play. We used one tie as a blindfold to show that he was blind. We also used sticks to show that these were the only things that kept us standing. This was to show that we were drained of energy and needed food, and that people were injured because they had limps. We used 2 different tempos in our scene and experimented in where to use them. ...read more.

This is not what we would have wanted to do because this is a piece that tries to make the audience cry. I had to adapt to the physicality of my character coughing like a hag. To show this I held my hand over my mouth very frequently and tried to make my cough sound very deep and croaky. This was too show that I was kind of gasping for fresh air. This communicated to the audience that I was not well and that the air was poisoness around me. To enhance the scene we could have used a slow weary piece of music in the 1st verse as it was slow and in the 2nd verse used a fast free flowing panicky music piece. I f we had used costumes and special effects we could have used soldiers outfits that had been torn, shredded and emulsified in dirt, blood and mud. We could have used special effects such as cuts and injured/broken limbs. They would actually physically show pain in the characters. Dayle Copperwheat ...read more.