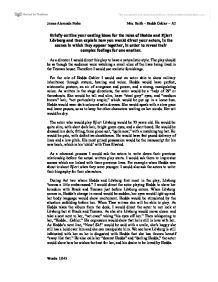 Briefly outline your casting ideas for the roles of Hedda and Ejlert L�vborg and then explain how you would direct your actors, in the scenes in which they appear together, in order to reveal their complex feelings for one another. As a director I would direct this play to have a naturalistic style. The play should be as though the audience were watching a small slice of the lives being lived in the Tesman house. Therefore I would use realistic furnishings. For the role of Hedda Gabler I would cast an actor able to show military inheritance through stature, bearing and voice. Hedda would have perfect, aristocratic posture, an air of arrogance and power, and a strong, manipulating voice. As written in the stage directions, the actor would be a "lady of 29" or thereabouts. She would be tall and slim; have "steel grey" eyes, and "medium brown" hair, "not particularly ample," which would be put up in a loose bun. ...read more.

As she sits L�vborg would move closer and take a seat next to her, "not once" taking "his eyes off her." Then whispering to her, "Hedda...Gabler." His expression would show that he is still in love with her. As Hedda's next line, "Now! Sh!" would be said with a smile, she's happy she still has a hold over him and she can manipulate him. We see how L�vborg is still infatuated with her as he is disgusted with Hedda that she has thrown herself "away like that." He also calls her "dearest Hedda" and "darling Hedda," the actor would show how he wishes the best for her, and his desire to be loved by Hedda. When Mrs. Elvsted enters Hedda will be happy as she is now able to see how her actions will affect people's lives. Although she doesn't quite expect Mrs. Elvsted and L�vborg to be as close. "He says I've inspired him, too," Hedda's reaction to this line would be envy, she wanted to be the inspiration, she wanted to be at the heart of something exciting, instead she is bored all day. ...read more.

He takes a slightly angry tone as he remarks that Hedda "should have used it" before. Hedda clasps her hands around his during the line "well...! You use it now," showing a small but significant sign of affection for L�vborg. When he leaves she would move slowly over to the stove momentarily stopping to retrieve the manuscript. The pulling up a chair she would begin to burn the manuscript, page by page, ripping each one with an audible tear. Saying her lines slowly with a sneer. During her time with L�vborg, we see that Hedda Gabler can show affection for others, and we also see her most manipulative side. The softly spoken "vine leaves" image shows how Hedda controls others to gain the perfect circumstances for her dull life, these ideals of love give her happiness. When her ideals are not met, then her attitude changes and the characters are put into place until she is happy with what is happening around her. ?? ?? ?? ?? James Alexanda Perks Mrs. Reith - Hedda Gabler - A2 Words: 1,043 ...read more.