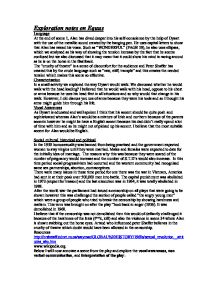 Exploration notes on Equus Language At the end of scene 1, Alan has dived deeper into his self-conscience by the help of Dysart with the use of the metallic sound created by the banging pen. He uses capital letters to show that Alan has raised his voice. Such as "WONDERFUL" (PAGE 58), he also uses ellipses, which we analysed as his way of showing the tension increase by the fact that he seems confused but we also discussed that it may mean that it could show his mind is racing around as he is on the horse in the flashback. The "cruelty of theatre" is a sense of discomfort for the audience and Peter Shaffer has created this by the crude language such as "raw, stiff, trample" and this creates the needed tension which makes this scene so effective. Characterisation In a small activity we explored the way Dysart would walk. We discussed whether he would walk with the head leading? ...read more.

After the world war the parliament had issued a censorship on all plays that were going to be shown however this was challenged the section of people called "the angry young men" which were a group of people who tried to break the censorship by showing harshness and realism. This term was brought on after the play "look back in anger (1956). It was demolished in 1968. I believe that if the censorship was not demolished then this would of defiantly challenged it because of the harshness of the lexis (f**k, kill) and also the violence in scene 34 where Alan is shown stabbing out the horse eyes. Artaud who influenced peter Shaffer believes in the cruelty of theatre which doubt would have been allowed in the censorship. Resources http://hrsbstaff.ednet.ns.ca/waymac/GLOBAL%20HISTORY/1960s/sexual_revolution__attitudes_abo.htm www.wikipedia.org Below I will now annotate a scene from the play and explore the vocal awareness, non verbal communication, and interpretation of the play: Visual, aural and spatial The costumes of the characters should be realistic because then it shows a contrast between them and the events that occur in the play. ...read more.

In the stage direction it says that "he runs and jumps high onto nugget's back" this would push the actor's sense of safety to the limit because he is actually carrying Alan on his back. Artaud also believed in the language of movement, he believed that this language could communicate ideas to the audience more directly then words, and in scene 21 most of the action is mimed and this means that non-verbal communication is needed. In this scene he is about to ride the "god", Equus and so he would have a ritual, this would mean that his character would moved slowly and precise, not making any sudden movement, he should walk around the field with his arms down by his sides his if he was walking down the aisle to get married. When he picks up the "manbit", he should bend over slowly and emphasis the fact that he has just picked up a "manbit", this would represent the ceremony of this event because this is a special object. This would also increase the tension in the scene with relates to the "theatre of cruelty". ...read more.